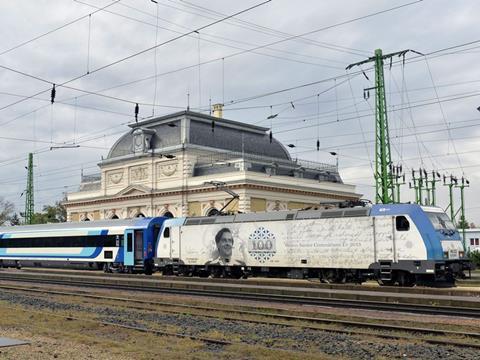 HUNGARY: Work to modernise and upgrade the Budapest Rákos – Hatvan section of the Budapest – Miskolc main line is to get underway during February for completion by December 31 2020. The line forms part of Pan-European Corridor V, and also handles significant suburban traffic.

The project is being managed by national infrastructure agency Nemzeti Infrastruktúra Fejlesztő, and funded by the EU’s Connecting Europe Facility and Integrated Transport Operational Programme.

Track and electrification equipment on the double-track line will be renewed, noise barriers installed, three overbridges provided and platform heights standardised at 550 mm. On completion trains will be able to run at up to 160 km/h, although the curvature will impose permanent speed restrictions of 100 km/h or 120 km/h on some sections.

The project includes rebuilding Gödöllő station, with two extra tracks to be added for use by terminating services from Budapest which will take the number of platforms to six. The terminus of HÉV local commuter line Line H8 is to be rebuilt on a new site to make it easier for passengers to interchange with main line services.

A later phase of the programme would include the installation of ETCS Level 2, which is to be procured separately.