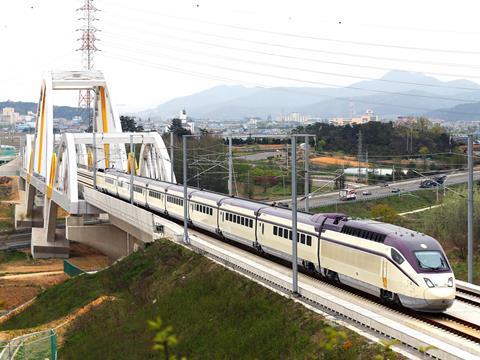 SOUTH KOREA: The Ministry of Land, Infrastructure & Transport announced on July 11 government approval for the construction of a 94 km railway between Chuncheon and Sokcho in the northeastern province of Gangwon.

Work is expected to begin in the second half of 2017 and take around eight years. The line is to be designed for speeds of up to 250 km/h and will have intermediate stations at Hwacheon, Yanggu and Inje. It forms an end-on extension of the 64 km Seoul – Chuncheon Gyongwon Line, which was electrified and rebuilt for 180 km/h operation in 2010. Through journey time from Seoul to Sokopcho on the east coast would be around 1¼ h, compared to the current 2½ h by bus.

The line has been promised for around 30 years, but three previous studies concluded that the project would not be cost-effective. The latest proposal incorporates changes to reduce the estimated cost by 64bn won to 2·06tr won, while a new evaluation was undertaken by the Ministry of Strategy & Finance and the Korea Development Institute which considered the wider economic benefits to Gangwon province including an expected increase in tourism.

The Ministry of Finance has also approved the construction of two new rail connections south of Seoul region with a total value of 639bn won. A 3·5 km link in Hwaseong would connect the Seoul – Busan high speed line to Eocheon station on the Su-In Line, allowing faster direct services between Busan and Incheon Airport. A 4·7 km link at Soejeong-ri would enable more high speed trains to serve Suwon.