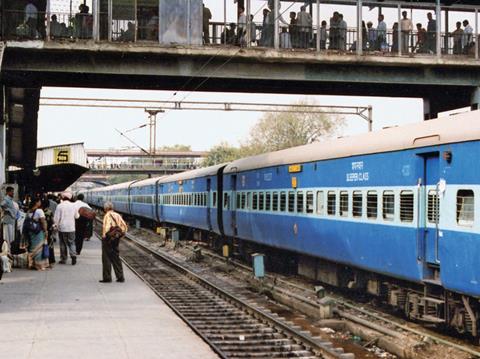 INDIA: Plans for a pilot installation of the European Train Control System on one of the country’s busiest main lines have been approved by the Indian Railway Board, following government calls for a re-evaluation of its resignalling strategy.

As part of a broader investment strategy and a drive to improve safety, the Ministry of Railways had envisaged a rapid roll-out of new signalling across the national network over six years. IR was expected to award one or two turnkey contracts for the work in order to obtain economies of scale.

However, in April the Prime Minister’s office raised questions about this policy and asked IR to re-evaluate its strategy. The board has now decided to undertake a full-scale pilot on one route before finalising its future implementation strategy.

ETCS Level 2 is therefore to be introduced on the 780 km Ghaziabad – Mughalsarai section of the Delhi – Kolkata main line. One of the key corridors in the ‘Golden Quadrilateral’ linking India’s four main cities, this route is considered by IR to be the busiest in the country, operating at around 150% of its nominal capacity. This in turn has resulted in the worst punctuality figures for any of IR’s 17 zonal railways.

According to IR, the Ghaziabad – Mughalsarai section was selected for the ETCS Level 2 trial because of its high traffic density, which offers potential benefits for both capacity enhancement and safety, as well as improving average train speeds.

‘Modern signalling will help reduce congestion on the rail network and increase line capacity by 40% to 50%’, an IR spokesman told local media. ‘It will also improve punctuality, as it can eliminate train delays due to automated signalling, while providing real-time information of train movements and eliminating the need for manual data logging.’