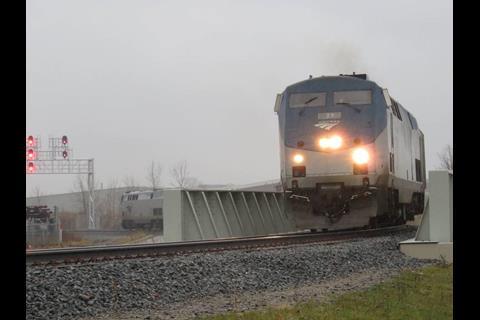 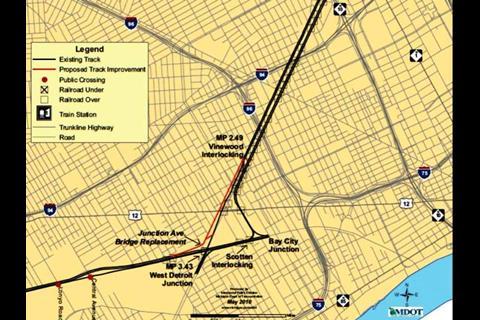 USA: Amtrak’s Wolverine passenger trains between Chicago and Detroit have begun using a new curve at West Detroit Junction, which has been built in conjunction with the upgrading and double-tracking of the former NS route now owned by Michigan Department of Transportation.

Completed in late December, the US$15·8m curve was partially funded by a US$7·9m grant from the Federal Railroad Administration approved in 2012. Located around 3 km south of Amtrak’s Woodward Avenue station, the single-track curve connects the former NS (ex-Conrail) line from Ann Arbor and Chicago with the CN route to Pontiac, which serves the Amtrak station.

The new connection enables passenger trains to bypass the congested area around the triangular Bay City Junction at the Scotten Interlocking further east. The curve is carried over Junction Avenue on a new bridge built as part of the project.

As well as improving the performance of Amtrak services, the new connection is expected to facilitate the introduction of MDoT’s planned commuter rail service between Detroit, Dearborn and Ann Arbor.