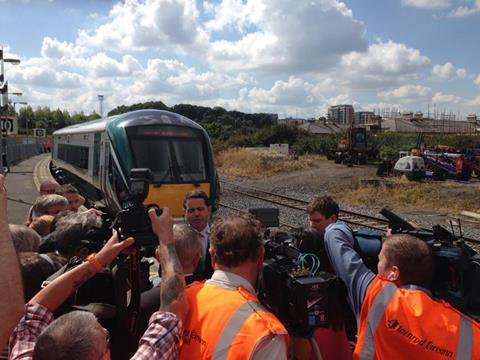 IRELAND: Work on a €13·7m project to upgrade the 4·4 km line through the Phoenix Park Tunnel in Dublin was officially launched by Minister for Transport, Tourism & Sport Paschal Donohoe on August 18.

From autumn 2016 commuter services from Kildare west of Dublin will be able to use the line to run though to Connolly, Tara Street, Pearse and Grand Canal Dock stations in the city centre. ‘For the first time, commuters on the popular Kildare suburban rail line will have frequent services directly into the heart of the south city business district’, said Donohoe. ‘This will provide an attractive alternative for private motorists who currently commute into the city along the congested N7 corridor.’

The line is currently used for freight, empty stock movements and special trains. According to national railway Iarnród Éireann, it has not carried regular commuter services ‘in the modern era’ owing to capacity constraints at Connolly station, which will be removed by current resignalling works.