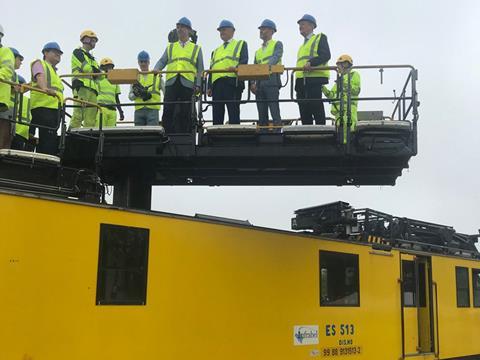 BELGIUM: Infrabel has started work on the 3 kV DC electrification of the single-track Line 19 from Mol to Neerpelt and the Dutch border at Hamont. Wiring of the 33 km route is expected to cost €47·5m, of which 40% will be financed by the European Union.

The line will be fed from three 4·8 MVA substations in Hamont and Neerpelt and a 6·5 MVA substation at Lommel, together with a back-up unit in Neerpelt taking power from the national three-phase grid. A €7·6m contract for installation of the overhead line equipment was awarded to Strukton Rail in July.

Under discussion for several years, the electrification will enable SNCB to end the use of diesel traction for regional passenger services in the provinces of Antwerpen and Limburg, although the operator will continue to deploy Class 41 DMUs around Gent and in the southern part of the country.

Originally part of the so-called Iron Rhine freight corridor which connected the port of Antwerpen to Germany’s Ruhr industrial region, the line continues for 12 km beyond the border to join the Eindhoven – Roermond route at Weert. At present the Dutch section is sparsely used by freight traffic to and from Budel, and there is currently no plan to electrify that part of the route

Local authorities have long been campaigning for the reinstatement of cross-border passenger services between Neerpelt and Weert, with studies indicating that this would have positive results in terms of ridership and revenue, providing that regional co-financing can be obtained and a suitable operator appointed. Electrification of the Mol – Neerpelt – Weert link was discussed at a summit between Vlaanderen Minister-President Geert Bourgeois and Dutch Prime Minister Mark Rutte at the end of 2016.