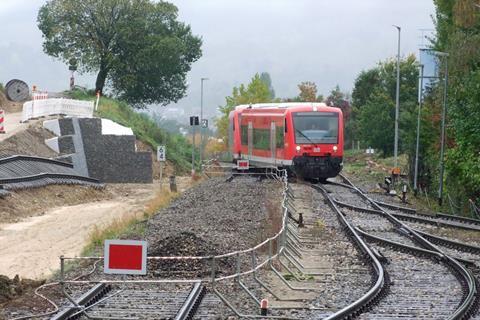 GERMANY: Erms-Neckar-Bahn AG has begun work to modernise and electrify the 10 km Ermstalbahn between Metzingen and Bad Urach in Baden-Württemberg. This forms part of the Regionalstadtbahn Neckar-Alb programme to develop a Karlsruhe-style tram-train network.

In the first stage a 600 m section of the route at Dettingen-Gsaidt is to be double-tracked, an 80 m island platform provided and a digital interlocking installed. This will enable trains on the branch to pass each other, facilitating a planned increase in services from hourly to every 30 min.

Electrification is scheduled to be undertaken between May and September 2021, station platforms will be extended to 80 m, and a new platform and associated trackwork is to be installed at Metzingen.

The overall cost of the project is €23·1m, with the federal and Land governments between them contributing 90%. Newly procured light rail vehicles are expected to be in use from 2026.

‘From the end of 2022 onwards, the Ermstalbahn will be served by modern electric trains every 30 min’, said ENAG CEO Carsten Strähle. ‘Thanks to the fast connections, cities and the surrounding area will be closer together’, he said, adding that improved and environmentally friendly local services were predicted to bring a significant increase in ridership and modal shift from road to rail.