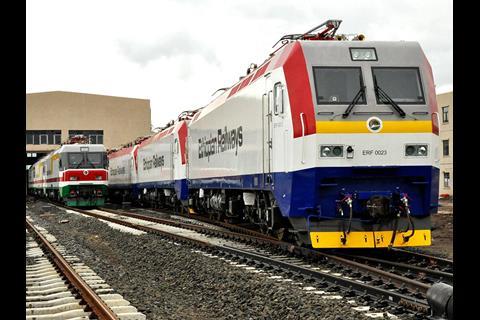 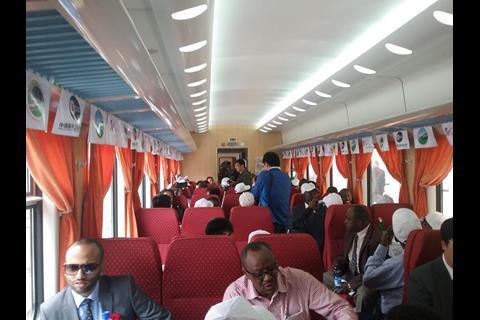 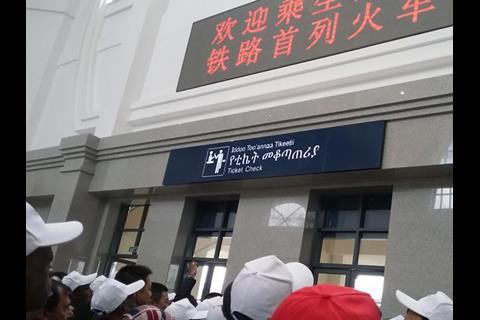 ‘It is the first standard gauge electrified railroad on the continent built with Chinese standards and technology, and certainly it will not be the last’, Chinese Ambassador to Ethiopia La Yifan told the local media. ‘Many stand to benefit from it.’

The 1 435 mm gauge line electrified at 25 kV 50 Hz replaces the out-of-use metre-gauge railway which opened throughout in 1917. The new line is designed to China’s specifications for operation at up to 120 km/h, providing a freight transit time of between 10 h and 12 h, compared to two or three days by lorry.

The line is initially being used for freight, with passenger services expected to start following three months of test running. The first freight services had actually run to a temporary unloading facility in Merebe Mermersa, 112 km south of Addis Ababa, in November 2015, when the partially-completed line and construction locomotives were used to move wheat which the government had imported for use in areas affected by drought.

Operations will be managed by Chinese staff for an initial five years, to give time for local employees to be trained; staff have also been sent to China and Russia for specialist training.

In 2011 state railway development agency Ethiopian Railway Corp awarded China Railway Group a contract to build the 330 km Sebeta/Addis Ababa – Miesso section, and China Civil Engineering Construction Corp the contract for the 339 km between Miesso and the border with Djibouti. The 100 km Djibouti section of the route was built by China Railway Construction Corp under a separate US$505m contract awarded by the government in February 2012.

In June 2014 CSR Zhuzhou was awarded a contract to supply three passenger and 32 freight electric locomotives for the line. Rated at 7·2 MW, these are based on proven technology, but adapted for local conditions including the 2 000 m altitude difference and the desert environment with daytime temperatures of 50°C but cold nights.

CNR Dalian supplied diesel locomotives for use during construction, and wagons and coaches have also been supplied from China.

The line is planned as the first step in a wider national and eventually regional rail network. In June 2012 ERC signed a US$1·7bn turnkey contract for Turkish firm Yapı Merkezi to build a 389 route-km line starting at Awash on the Djibouti – Addis Ababa line and running north to Weldiya/Hara Gebeya. Completion is planned for April 2018. China Communications Construction Co is building the next 220 km north from Hara Gebeya to Mek'ele under a US$1·5bn contract. A line is also planned to run from Hara Gebeya eastwards to the port of Tadjurah in Djibouti, providing a second route to the sea.