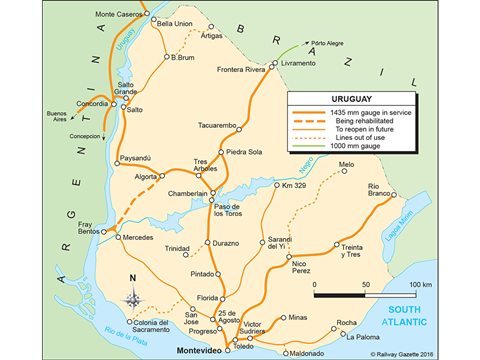 URUGUAY: The national court of auditors has given the go-ahead for the government to formally award the Ferrocarril Central public-private partnership contract to the Via Central consortium.

The contract covers the design, financing, construction works and maintenance for 22 years of the 273 km main line running north from Montevideo to Paso de los Toros. This will include double tracking, work to raise axleloads to 22·5 tonnes and the maximum speed for freight trains to 80 km/h, grade separation and the construction of sections of new alignment. It also includes the construction of branches to Montevideo docks and a planned UPM pulp mill on the south bank of the Rio Negro. Work is scheduled to get underway in 2019.

The Ministry of Transport & Public Works had received three bids for the contract:

The Chinese consortium dropped out in 2017 after the government decided it had not met the tendering conditions. Via Central was named preferred bidder in September, but Via Libre appealed against the decision.

· The Ferrocarril Central project was described in detail in the November 2018 issue of Railway Gazette International magazine, which subscribers can access in the digital archive.