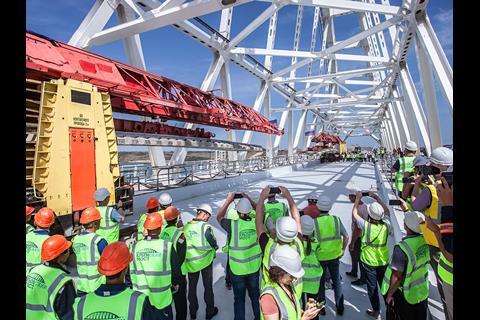 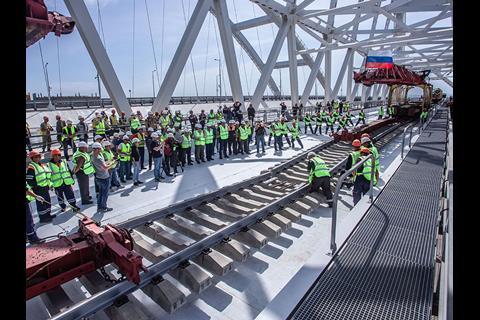 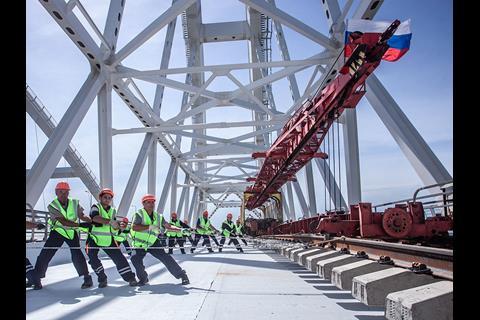 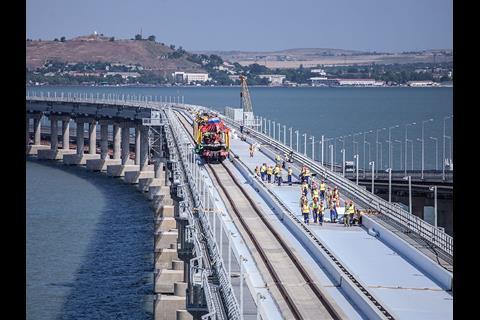 EUROPE: Tracklaying is underway on the railway which Russia is building to link the mainland to the eastern end of the Crimean peninsula, which it annexed from Ukraine in 2014.

A bridge across the Kerch Strait has been proposed for many years. Following the annexation, the Russian government awarded Stroygazmontazh a 228bn rouble contract in January 2015 to build parallel road and rail bridges. The road bridge was opened by President Putin in 2018, and the railway bridge is expected to open in December this year, replacing the current train ferry.

Tracklaying is also underway on the approaches to the bridge, including a new 18 km double-track connection to the existing Crimean rail network and a station at Kerch-Yuzhnaya. This will create a 80 km Vyshestebliyevskaya – Bagerovo line, electrified at 25 kV 50 Hz and suitable for 120 km/h operation. On opening this will reduce the Moscow – Simferopol journey time from 42½ h to 18 h.

Ukraine does not recognise the annexation of Crimea. ‘Since 2016, when Russia started building hundreds of pillars to support the bridge, on land, on the seabed, and in the water of the Kerch Strait, Ukraine has been regularly and continuously protesting such actions’, said a spokesman for the Ministry of Foreign Affairs. ‘The illegal construction of the Kerch Bridge is part of Ukraine’s case against the Russian Federation concerning the rights of the coastal state in the Black Sea, the Sea of Azov and the Kerch Strait under the United Nations Convention on the Law of the Sea, which is now being heard at the Permanent Court of Arbitration in Den Haag.’