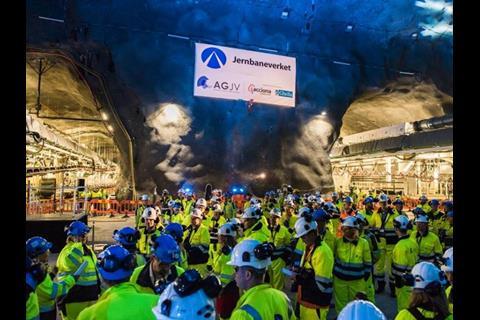 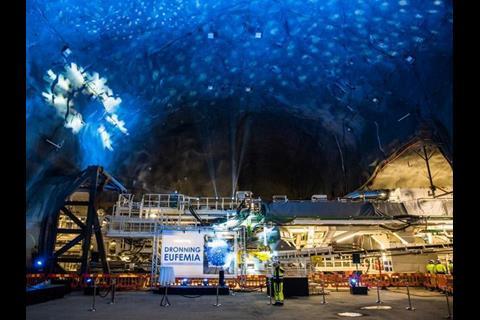 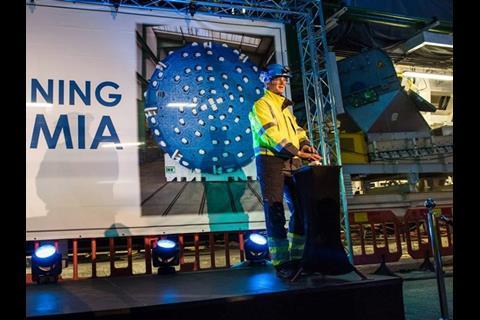 NORWAY: Work has started to excavate the longest railway tunnels in Scandinavia, following the official launch of the first two tunnel boring machines in a ceremony on September 5 attended by Prime Minister Erna Solberg.

Being built by a joint venture of Acciona and Ghella under a €1bn contract awarded in March 2015, the 18·5 km twin-bore tunnels will carry Jernbaneverket’s 22 km Follo Line which duplicates the busy Østfold Line running southeast from Oslo.

The contractors will use four TBMs simultaneously to excavate the running tunnels north and south from a shaft at Åsland, around half way between the capital and Ski.

The first TBMs to be deployed in Norway have been manufactured by Herrenknecht in Germany, and are specially designed to tunnel through hard rock in the Ekeberg hills. The 150 m long machines weigh around 2 400 tonnes, and have a 9·96 m diameter cutting head. Each TBM is expected to bore an average of 12 to 15 m of tunnel per day. Boring is due to be completed by the end of 2018, leaving three years for fitting out before the Follo Line opens in December 2021.

During the ceremony, attended by around 90 guests, the Prime Minister christened the first two TBMs Dronning Eufemia and Dronning Ellisiv, after medieval Norwegian queens. Transport Minister Ketil Solvik-Olsen then officially started Dronning Eufemia on its way. Both machines will drive northwards towards Oslo. The third and fourth TBMs for the Åsland – Ski drives are to be named Anna fra Kloppa and Magda Flåtestad after a local merchant and ferrywoman.

‘This is a very important milestone for the project’, said Jernbaneverket Deputy Director General Gunnar Løvås. ‘We are very impressed with the work being done at Åsland since the contract was signed.’

‘We have been preparing to start TBM tunnelling for a year and a half now, and I am proud to say we are ahead of schedule’, added Acciona Ghella Project Manager Fernando Vara. ‘Now is when work really begins.