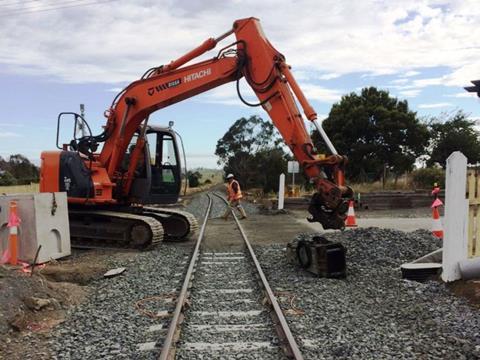 AUSTRALIA: The federal government has allocated A$59·8m for the Tasmanian Freight Rail Revitalisation ProgrammeAs part of its latest budget, matching a similar commitment from the state.

The A$119·6m Tranche Two of TasRail’s Infrastructure Investment Fund is intended to support infrastructure rehabilitation and enhancement works over a four-year period from June 1 2019. This will follow on from the current four-year Tranche One package which allocated a similar amount for 2015-19.

According to TasRail, almost A$92m of the Tranche One funding had been spent by April 30, targeted on critical rail infrastructure works including bridge strengthening and 30 level crossing upgrades. Track renewals have seen the laying of 106 km of new rail and the replacement of more than 100 000 sleepers, along with reballasting and tamping. Tranche Two will include formation reconstruction and upgrading of 35 level crossings, as well as further ballast, sleeper and rail replacement on the principal routes connecting Hobart to Launceston, Burnie and Rosebery.

Describing the May 8 announcement as fantastic news for TasRail, its local contractors and Tasmanian industry, new Chief Executive Officer Steven Dietrich said the two governments had recognised the importance of rail freight in Tasmania, where TasRail is now handling more than 3 million tonnes of bulk and intermodal traffic year.

‘This funding gives certainty to our existing highly-valued customers, as well as the new customers we are currently in negotiations with, that decades of deferred rail infrastructure spend is being addressed and that TasRail will further expand its capabilities of providing innovative logistics solutions’, he said, adding that the funding announcement would allow the current project delivery teams to remain fully mobilised for the next round of projects