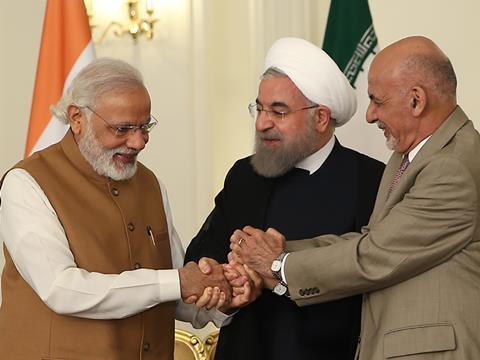 IRAN: On May 23 the Presidents of Iran and Afghanistan and the Prime Minister of India signed a trilateral agreement to develop a transport and trade corridor from India to Afghanistan via the port of Chabahar in southeast Iran, while Iran and India also signed a series of bilateral agreements which include Indian support for the development of the port and a 600 km rail link to the existing Iranian network at Zahedan.

India has allocated US$500m for the development of Chabahar, and Iran’s President Rouhani said he welcomed Indian companies’ investment in the construction of the port and railway. Media reports said Indian consultancy Ircon could be involved in the railway project, with rails to be supplied from India.

Construction of the Chabahar – Zahedan railway had been officially launched with a ceremony at Konarak in December 2010, at which time completion had been envisaged within five years.

The development of an international transport corridor through the port is intended to support trade between India, Iran and Afghanistan, as well as with the wider Central Asian region and to Europe via the North – South Transport Corridor through Azerbaijan. India’s Prime Minister Modi said this could bring a 50% reduction in the cost of moving freight to Europe compared to traditional sea routes.

The route through Chabahar avoids the political, practical and security problems of transiting Pakistan, and provides a geopolitical counterbalance to the Chinese-backed and managed port at Gwadar in Pakistan which is at the end of an developing land transport corridor from China.