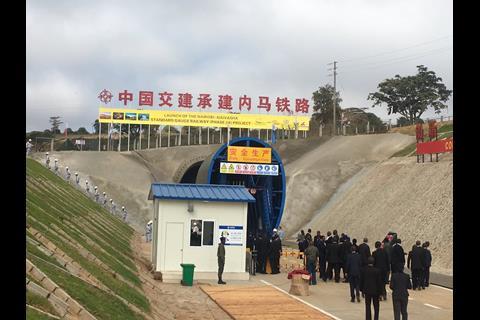 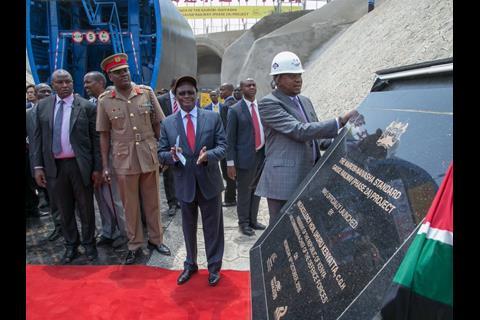 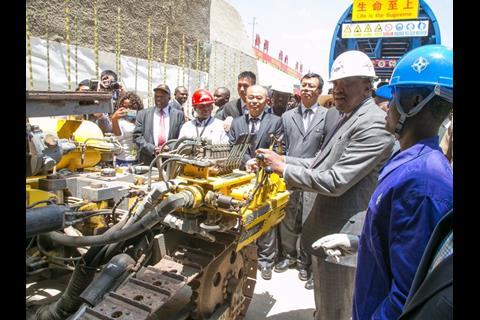 KENYA: Construction works for the second phase of the Standard Gauge Railway project were officially launched by President Uhuru Kenyatta with a ceremony at the Embulbul work site in Ngong Town on October 19.

Phase 2A covers the 120 km Nairobi – Naivasha section of the 2 937 km MoKaKi corridor. It was approved by the government in May 2015, in order to serve a new economic development zone in the Rift Valley. The US$1·5bn project is being funded by a loan from the Chinese government.

Construction is to be undertaken by China Road & Bridge Corp, which is currently building the 473 km Phase 1 line between Mombasa and a new terminus at Embakasi on the outskirts of the capital. Phase 1 is now expected to open in January 2017.

The construction contract for Phase 2A was signed by Kenya Railway Corp Managing Director Atanas Maina and CRBC Chairman Wen Gang in September 2015. CRBC has already started work at Embulbul, where the 8 km Kajiado tunnel is being bored to carry the 1 435 mm gauge line through the Ngong hills west of Nairobi.

There has been some controversy over the planned route of the new line through the Nairobi National Park to the south of the capital, but KRC announced on October 19 that it had signed an agreement with the Kenya Wildlife Service, adding that the alignment had been selected to minimise the gradients between Nairobi and the Rift Valley. Maina pointed out that 123 km of Phase I had been built through the Tsavo National Park with appropriate mitigation measures including a lengthy viaduct. Work in the Nairobi park would be completed within 18 months including full remediation, he emphasised.

A separate agreement covering Phase 2B from Naivasha to Kisumu and 2C from Kisumu to the Ugandan border at Malaba was signed with CRBC's parent China Communications Construction Co in March.

Read more about the Kenyan SGR project in the June 2016 issue of Railway Gazette International, available to subscribers in our digital archive.