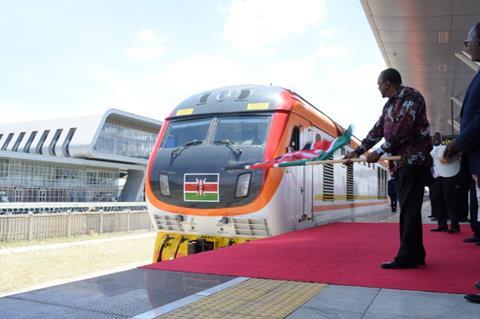 KENYA: The next 120 km section of the Chinese-built Standard Gauge Railway was formally inaugurated by President Uhuru Kenyatta on October 16.

Running from the Nairobi SGR station at Embakasi to a temporary terminus at Suswa, 35 km southwest of Naivasha, the extension takes the 1 435 mm gauge line around the south of the capital and down the escarpment into the Rift Valley before turning west towards Kisumu. Suswa has been used as construction base for the project by China Communications Construction Co subsidiary China Road & Bridge Corp.

According to Kenya Railways’ acting Managing Director Philip Mainga, Phase 2A will initially open for passenger trains, serving four of the planned 12 stations that are intended to support a Nairobi suburban service. These are located at Ongata Rongai, Ngong, Maai Mahiu and Suswa. A further station at Nachu is expected to open shortly. No date has yet been set for the start of freight operations, due to a lack of suitable terminals.

Like the original Mombasa – Nairobi SGR inaugurated in May 2017, the KSh150bn extension has been funded by Chinese loans, and will initially be operated by the Chinese contractors.

Phase 2A has been under construction since 2016, although completion was delayed by land acquisition issues. The line was originally expected to open in June, but test trains have reportedly only been operating for around two months. 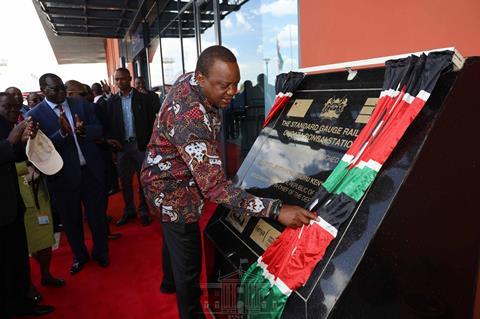 During the ceremonies, the President also formally marked the start of work on a 400 ha dry port and industrial park at Maai Mahiu, to serve the greater Naivasha area.

Under plans announced earlier this year, the dry port is also expected to be linked to the existing metre gauge main line between Nairobi and Kampala, which the government intends to revitalise for transit traffic to and from Uganda, having failed to raise the funding required for the rest of the SGR project.

Phase 2B would see the line extended from the current railhead at Duka Moja west of Suswa to the port of Kisumu on Lake Victoria, with Phase 2C running north from there to the Ugandan border at Malaba.