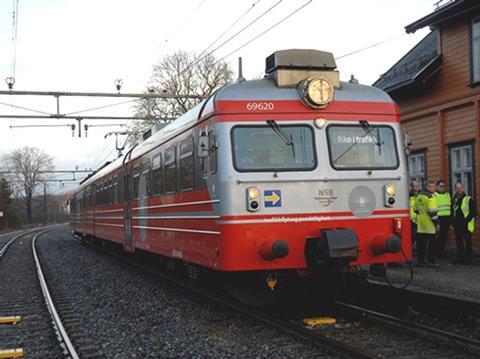 NORWAY: Infrastructure manager Jernbaneverket has inaugurated its pilot project for the European Rail Traffic Management System on the Rakkestad - Sarpsborg branch of the Østfoldbanen southeast of Oslo. The line, which last saw regular passenger services a decade ago, has been fitted with ETCS Level 2 in order to test the technology ahead of a national roll-out.

Although development work has been underway for some time, JBV Director General Elisabeth Enger marked the launch of regular testing on December 11 by symbolically closing the signalbox at Ise which had controlled the branch for the past 53 years. Around 100 invited VIPs then sampled a test run on board the NSB Class 69 EMU which has been fitted with ETCS onboard equipment for the trials.

Pointing out that much of the Norwegian rail network is still equipped with 'very old' signalling systems, Enger said JBV needed to modernise its control technology to improve punctuality and reliability. The government agreed in November 2012 to start a network-wide conversion to ERTMS, which Enger confirmed has strong political support. JBV envisages that the transition will take 15 years at a cost of NKr15bn, of which the first NKr6bn tranche has been allocated in the government's 2014-23 national transport plan.

The Ski - Sarpsborg section of the upgraded Østfoldbanen, which is due to open in the autumn of 2015, will be Norway's first new line to be equipped with ETCS, although JBV will be making provision for resignalling in its other station remodelling projects. Enger said the lessons learned from the pilot line would be important in supporting the introduction of ERTMS across the rest of the country.