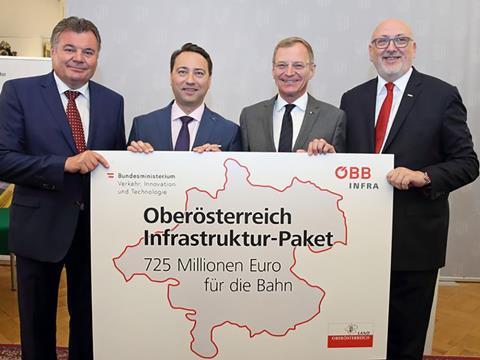 AUSTRIA: The Land of Oberösterreich and Austrian Federal Railways have agreed an €725m programme of route modernisation, station upgrading and electrification works for 2019-30.

This agreement includes the retention of all branch lines, and the roll-out of new singalling and safety systems.

ÖBB is to retain ownership of all lines in the region, with the exception of the 20·5 km single track and non-electrified Haiding – Aschach an der Donau route which is to be transferred to the Land on January 1 2021.

The 37 km Mattigtal line from Steindorf bei Straßwalchen to Braunau am Inn will be modernised and electrified, with the 4·1 km to Friedburg electrified in 2021 and the remaining section wired by 2030.

The 57·6 km Mühlkreis line from Linz Uhrfahr to Aigen-Schlägl will be modernised, including electrification of the 28·8 km as far as Kleinzell.

The 30·1 km line from Wels to Grünau im Almtal will be electrified between Wels and Sattledt by 2030, and will also be used to test alternative traction systems.

The 39·8 km Donauuferbahn from Sankt Valentin to Sarmingstein will be modernised, with the 37·1 km as far as Nicola-Struden electrified. The Pyhrn line between Linz and Selzthal will be double-tracked between Nettingsdorf and Rohr-Bad Hall (15·7 km).

There will also be an extensive programme of station modernisation works across the region.

‘Investing in public transport is an investment in a sustainable future and makes an effective contribution to climate protection’, said Governor of Oberösterreich Thomas Stelzer when the agreement was signed on July 2. ‘As an economically strong Land, Oberösterreich also needs a strong infrastructure network that meets the increasing demands of freight and passenger traffic.’