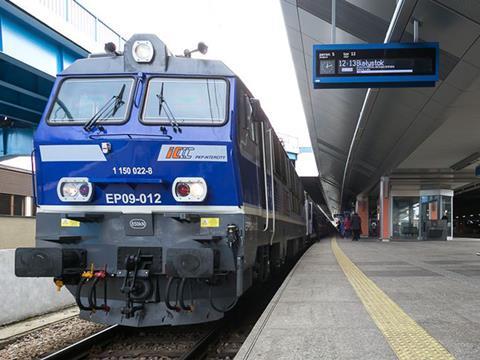 POLAND: Rail regulator UTK issued the first certification on March 3 for the use of GSM-R data radio to support ERTMS train operations on the Polish network. The use of ETCS Level 2 had been certified on March 19 2014, but formal approval of the GSM-R data communications was needed to permit full ERTMS deployment in revenue service.

A pilot installation of Bombardier’s Interflo 450 ETCS Level 2 train control on a section of the E30 corridor from Legnica to Bielawa Dolna near the German border was completed in December, initially operating in parallel with the legacy SHP equipment.

Certification of the GSM-R element paves the way for the commissioning of other ETCS Level 2 projects. These are already underway on the Warszawa – Gdańsk, Warszawa – Poznań, Legnica – Wrocław – Opole and Warszawa – Łódź corridors.

To date, Poland has been largely relying on its legacy radio system. This includes an emergency stop function, which complicated the introduction of GSM-R and required cross-functional testing. With approximately 1 500 route-km now being fitted, PKP PLK issued a tender last September for GSM-R implementation on a further 13 600 route-km, which covers the majority of the network and will enable full migration.

However, train operators have been reluctant to install the on-board equipment, and relatively little rolling stock has been fitted with GSM-R cab radios beyond a few locos for test purposes.