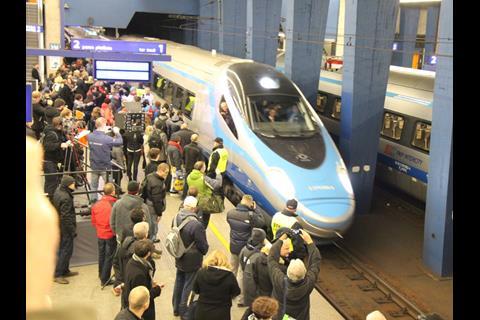 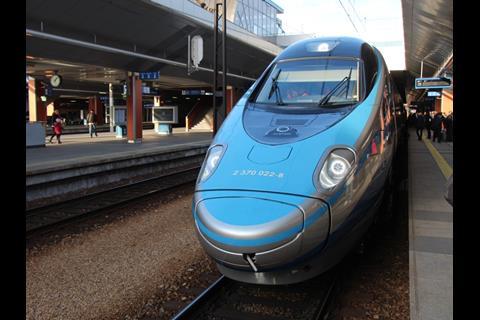 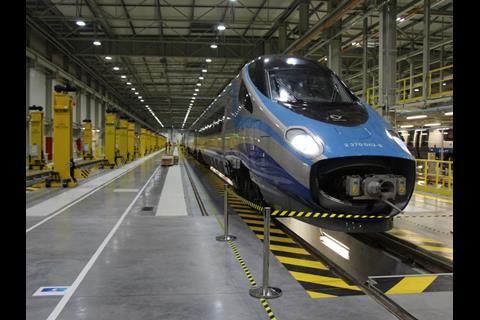 POLAND: PKP Intercity launched its Express Intercity Premium services on four routes radiating from Warszawa with the timetable change on December 14. The trains are operated with a fleet of 20 non-tilting Pendolino trainsets certified to operate at up to 250 km/h.

The seven-car Class ED250 trainsets have been supplied by Alstom Transport under a €665m contract awarded in 2011, which includes up to 17 years of maintenance at a purpose-built depot in Grochów to the east of the capital. Each set has seats for 57 first class and 345 second class passengers, with a buffet/bar and three four-seat business or family compartments.

PKP Intercity is initially using nine sets a day to operate 23 EIP services from Warszawa to Gdynia, Kraków, Katowice, and Wrocław. Most operate on the core Kraków – Warszawa – Gdańsk – Gdynia route, running hourly at peak times and every 2 h off-peak. There are two Pendolinos each way per day on the Katowice and Wrocław routes.

Headline journey times are 2 h 58 min from Warszawa to Gdańsk, 2 h 28 min to Kraków and 2 h 34 min to Katowice. EIP services from Warszawa to Wrocław run via the CMK trunk line, Częstochowa and Opole, taking 3 h 42 min against up to 6 h for the previous route via Poznań.

Arriving in Warszawa on the first train from Kraków, PKP Intercity CEO Marcin Celejewski told Railway Gazette it was a great day for passengers, with the new trains offering a step-change in quality, punctuality and price. Yield-managed fares begin at 49 złoty, with much emphasis on advance-purchase online.

Following extensive track upgrading, the Pendolinos are able to run at 160 km/h on the Warszawa - Gdynia route, and at 200 km/h on a 90 km section of the CMK equipped with ETCS Level 1. Operation at 250 km/h is dependent on the commissioning of ETCS Level 2, and Celejewski said no timescale had been agreed with infrastructure manager PKP PLK.

As part of the project, PKP has opened a new passenger station at Opoczno Południe on the CMK trunk line. At present this is only served by TLK inter-regional trains from Warszawa to Katowice, but it is expected to see Pendolino services in future.

Other loco-hauled services branded EIC (Express InterCity) will be switched to EIP operation over the coming months, with the eventual plan envisaging 17 Pendolinos in traffic, one spare and two for maintenance. All 20 trains have now been completed, with the final set being delivered to Poland at the beginning of December. However, the first unit which was used for testing and commissioning has been returned to Savigliano for retrofitting before entering revenue service.

As well as 3 kV DC for operation in Poland, the Pendolinos are equipped with 15 kV 16·7 Hz and 25 kV 50 Hz and the train control systems needed to run in Germany, Austria and the Czech Republic. However, certification for international operation is not seen as a priority, as the trains are restricted to domestic services for an initial 10 years under the terms of a grant from the EU Cohesion Fund which covered 22% of the project cost.

Alstom expects to employ around 130 people at the Grochów depot, which has three covered tracks for servicing and two for maintenance. The company is using its TrainTracer health monitoring and diagnostics systems to manage the fleet, ensuring that sufficient trainsets are available for the operator. Some sets are stabled overnight at the outer termini, and cycled through the depot as required. The fleet management and pit-stop maintenance regime has been developed using experience in maintaining the Virgin West Coast Pendolino fleet in the UK, with many staff being trained in Manchester.