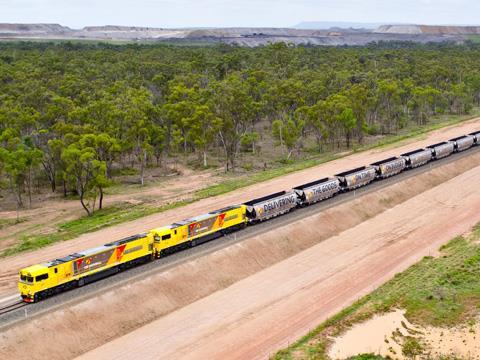 'GAP is a genuine transformational project', QR National Managing Director & CEO Lance Hockridge said at the opening ceremony, adding that it 'had been on Queensland's infrastructure wish-list for over three decades.'

Construction of the link began in May 2010 was completed ahead of the scheduled 20 months, despite exceptional weather, fire and a small earthquake. The 69 km line has three passing loops, 11 bridges and two road overbridges.

'Now that QR National is a publicly listed company it has the ability to make this type of investment that benefits all Queenslanders, without taxpayers having to foot the bill', said Fraser. 'Private sector investment in the State's rail infrastructure is a huge vote of confidence in the long-term viability of Queensland's resources sector'.

Further work on GAP will continue until mid-2012, including additional works on the Briaba section and upgrades to existing track on the Newlands line to accommodate larger 106 tonne wagon