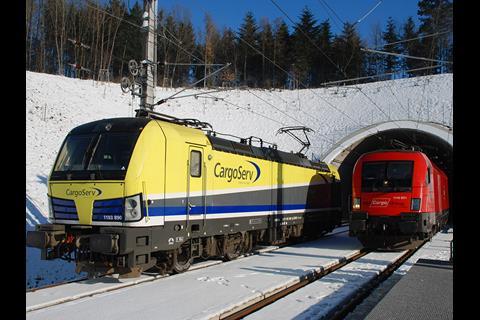 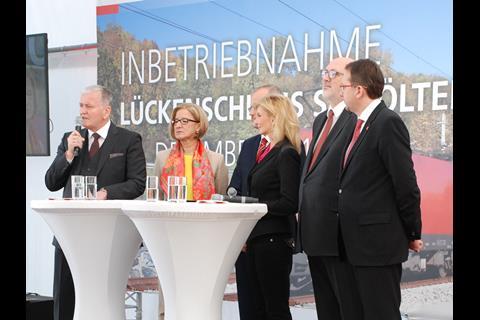 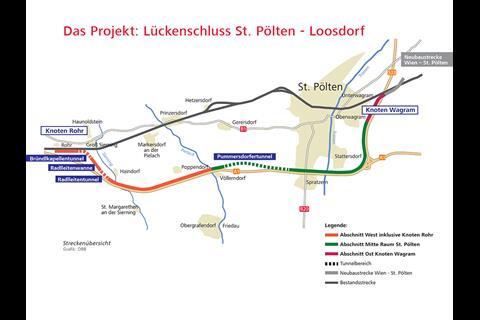 AUSTRIA: A 24·7 km freight bypass around the city of Sankt Pölten was inaugurated with a ceremony on December 1, ahead of the planned start of revenue services on December 10.

The bypass has been built as part of the wider project to upgrade the Wien – Salzburg Westbahn main line. It enables freight traffic to be diverted away from Sankt Pölten station, thereby freeing capacity for the operation of more intensive regional and commuter services as well as improving the urban environment.

The inauguration completes the final stage of the project to quadruple the 182 km Wien – Linz Kleinmünchen eastern section of the Westbahn. Work to design the bypass began in 1991 and construction was launched in 1999, but was suspended in 2000 before restarting in November 2009.

The final cost was €731m, which was partly funded by the European Union. ‘The EU is investing heavily in infrastructure projects of major importance for the European transport network’, said Andreas Boschen, head of the Connecting Europe Facility department at the EU Innovation & Networks Executive Agency, at the inauguration event. ‘The expansion of the Westbahn sets the course for sustainable and efficient cross-border traffic along the Rhine – Danube Corridor.’

The bypass is designed for 120 km/h running, and the line is equipped with ETCS Level 2 without lineside signals. At the eastern end at Wagram junction it connects with both the 1858 Westbahn route from Wien and the new line opened in December 2012. The central section of the bypass follows the S33 road and A1 motorway, and passes through the 3 485 m Pummersdorfer tunnel. The western section to the junction with the Westbahn at Roht includes the 350 m Radlleitn and 900 m Bründlkapellen tunnels. There are also 23 bridges on the bypass.

Elsewhere on the Westbahn, modernisation in the Linz area began in 2010, and quadrupling between Linz Hbf and Linz Kleinmünchen is scheduled for completion in 2018. The 16 km Linz – Marchtrenk section is scheduled to follow in 2020–26, while work on the 80 km between Wels and Passau is to be completed in 2021. The 23·3 km Neumarkt-Köstendorf – Salzburg section is to be modernised from 2026. This envisages the construction of a new double track alignment including the 14 km Seekirchner and 2 km Leitnerbauer tunnels.

East of Wien, a 37 km section of the Rhine – Danube Corridor between Wien and Bratislava is to be upgraded by 2023.