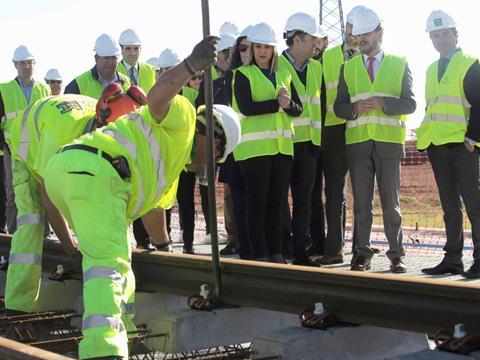 SPAIN: Rails and sleepers are being laid on the final section of Alcalá de Guadaíra branch of the Sevilla light metro, the Andalucía regional government announced on November 7. This covers a section between two viaducts near the line’s western end.

Tracklaying is due to finish next year, with railway systems expected to be completed in 2018 for opening in 2019. Contracts for electrification and signalling are still to be let.

The 12·5 km branch with 11 stops is being built between Pablo de Olavide station on the existing metro route and the town of Alcalá de Guadaíra to the east of Sevilla.

Work began in 2008 and is divided into three sections. Civil works on the Montecarmelo – Adufe and Adufe – Parque Tecnológico sections were completed in 2011, but work on the project was suspended. Following reactivation in April 2015, the regional government reports that work on the 4·2 km third section between Parque Tecnológico and Pablo de Olavide is currently around 45% complete.

The total cost of the project is €197·6m, which includes rolling stock. This would run at a maximum speed of 70 km/h, giving a journey time of 23½ min between Alcalá de Guadaíra and Pablo de Olavide. Ridership is forecast at 5 million passengers per year.