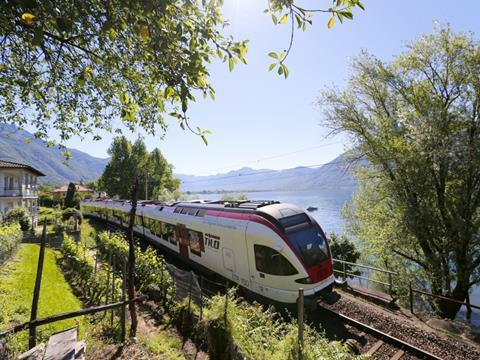 SWITZERLAND: The first section of the FMV cross-border rail link will open for revenue service on December 15, following a formal dedication on November 27 attended by representatives from canton Ticino, the federal government, SBB and TILO, the cross-border transport operator for Ticino and Lombardia.

Partially funded by the federal government, the Ferrovia Mendrisio – Varese is intended to carry direct cross-border services between Lugano and Milano’s Malpensa Airport, as well as local trains between Como and Varese. The short Swiss section diverges from the Gotthard corridor at Mendrisio and runs to Stabio, near the Italian border, where a new station with a large park-and-ride facility has been created.

SBB said it had completed the Mendrisio – Stabio section on time and on budget, thanks to innovative engineering techniques including the use of helicopters to install more than 500 catenary masts. However, work on the Italian portion has reportedly been suspended following a dispute between infrastructure manager RFI and the civil works contractor. While the Swiss portion largely follows an existing alignment, the onward connection via Gaggiolo to join the Varese – Porto Ceresio line near Arcisate requires a new route including a part-built viaduct and the 890 m Bevera tunnel. ‘We celebrate with a laughing and a crying eye’, said Claudio Zali, Head of Ticino’s Construction Department.

From the timetable change, TILO will introduce a limited interim service during morning and evening peak periods. An hourly route S40 will link Stabio with Albate-Camerlata, reversing at Mendrisio and calling at Balerna, Chiasso and Como San Giovanni. Route S50 will shuttle between Stabio and Mendrisio to provide a half-hourly service on the branch.

‘With the opening of the S40/S50 we are taking the first big step towards full operation’, said Anna Barbara Remund, SBB’s Director of Regional Services. ‘Regional trains encourage development, both domestically and across national boundaries and encourage modal transfer from road to rail.’ According to SBB, regional traffic in Ticino has almost doubled since the start of TILO operations in 2005; the services are now carrying almost 9 million passengers a year.