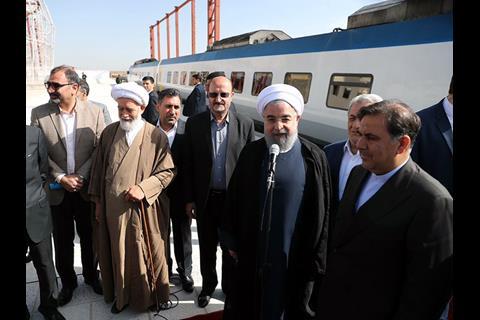 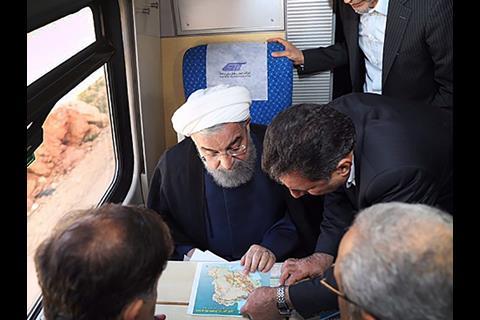 IRAN: The 267 km railway linking Tehran with the city of Hamadan was offiically opened on May 8 by President Hassan Rouhani and Minister of Roads & Urban Development Abbas Akhoundi.

Construction of the line began in 2001, but work stopped in 2004 before being restarted after the easing of sanctions in 2015. ‘The people of Hamadan province were waiting a long time for this railway‘, said Rouhani at the opening ceremony. ‘The inauguration of the line is a source of joy for those people.’

The line has cost 9·7tr rials to build. It starts at a junction at Robat Karim near Imam Khomeini International Airport southwest of the capital, then runs west via Saveh and Famenin. The alignment is designed for passenger trains running at a maximum speed of 160 km/h and 120 km/h freight services, and the line has an annual capacity of 2 million passengers and 4 million tonnes of freight.

The 70 km Malayer – Firouzan route built at a cost of 941bn rials was also opened on the same day.

Rouhani said developing national and international rail links was a crucial part of his administration's agenda, and called for cutting the bureaucracy which has has impeded progress.

Tracklaying has begun on the Hamedan – Sanandaj line, one of several projects currently underway including Arak – Khosravi, Mahabad – Orumiyeh, Mianeh – Tabriz and the North–South corridor which will connect Europe and the port of Bandar Abbas.