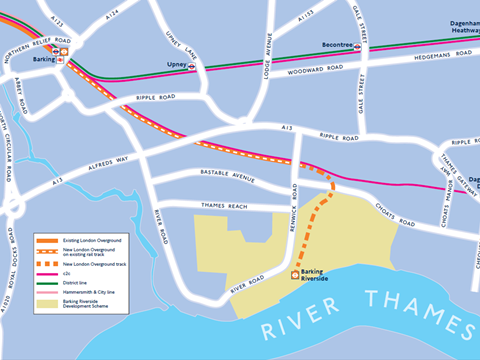 UK: Transport for London has invited expressions of interest in the contract to build a 4·5 km extension of the Gospel Oak – Barking line to the Barking Riverside development area of east London.

The extension would run alongside the existing London Fenchurch Street – Tilbury line between Barking station and the Renwick Road overbridge, where it would turn south to run over a new viaduct to reach the planned station. Around 1·5 km of new alignment would be required.

In March TfL applied to the government for a Transport & Works Act Order which would grant legal powers for the project. A public inquiry is expected in the autumn, and TfL expects to issue the invitation to tender following the completion of design work in 2017. Construction would begin in late 2017, with opening now planned for 2021.

The £263m project is fully funded, with the Barking Riverside Ltd joint venture of the Greater London Authority (49%) and developer London & Quadrant (51%) providing £172m and the remainder being covered by TfL.

Services would be operated as part of the London Overground concession. ‘The extension of the Overground will be key to the success of the exciting new developments at Barking Riverside, with a new station built alongside 10 800 new homes, shops and restaurants, and new school and health services’, said Val Shawcross, Deputy Mayor for Transport, on August 8.