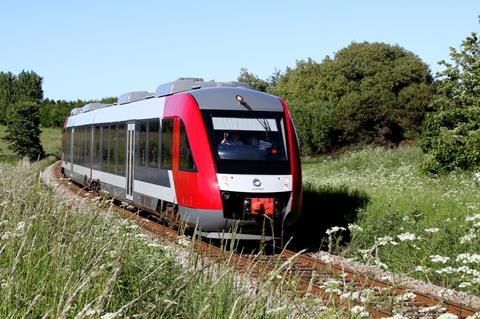 DENMARK: Conversion of the Østbanen local railway in eastern Sjælland into a busway could be a viable alternative to renewing the life-expired rail infrastructure, a study has suggested.

The infrastructure rail renewals which are required are expected to take 2½ years and cost at least DKr660m, which the regional council does not have. The council and the Ministry of Transport therefore commissioned the study of a bus alternative in January to help inform their decision on the best way forward.

The report which has now been completed by the ministry’s Road Directorate with the support of rail and bus operator Movia and consultancy Cowi suggests that bus rapid transit ‘has the potential’ to be part of the future public transport network, according to Minister of Transport Benny Engelbrecht. However, he stressed on June 10 that the decision on whether to refurbish the railway or build a busway would have to be taken by the council.

The study found that conversion could be expected to take about six years, at a cost of DKr805m to DKr892m, including two years for the construction work. It suggested that would not be a major deterioration in the quality of service or comfort, adding that there were potentially large savings in operating cost. Journey times would be extended by between 1 and 5 min. The buses could operate at higher frequency than trains, while CO2, particulate and noise emissions could be lower than the existing diesel trains.

The council plans to undertake a comparison of the advantages and disadvantages of BRT before making any decision. ‘The study shows that there are interesting economic prospects in rubber wheels, but there are also many uncertainties’, explained Chairman Heino Knudsen.