Tracklaying completed in Gotthard base tunnel 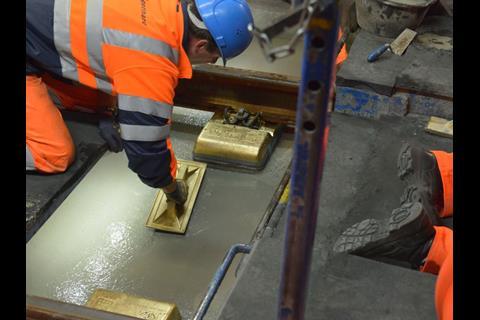 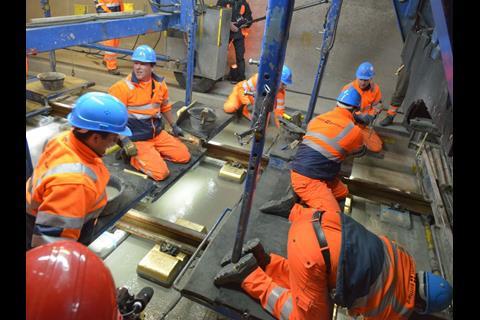 SWITZERLAND: The completion of tracklaying in the 57 km Gotthard base tunnel was marked with a ceremony at 12.00 on October 31, when the concrete was poured for a ‘Golden Sleeper’, 54 m from the southern portal at Bodio.

Noting that it is now possible for diesel-hauled trains to run through the base tunnel from end to end, the CEO of project promoter Alptransit Gotthard AG Renzo Simoni said an ‘important milestone’ had been achieved on schedule.

Installation of the railway systems has been contracted to the Transtec Gotthard consortium. Within this grouping, the trackwork has been undertaken by Balfour Beatty Rail and Renaissance Construction (formerly Alpine Bau) The contractors have taken 39 months to install Sonneville Low-Vibration Track through both bores, employing 125 workers in shifts around the clock, seven days a week. The work required the laying of 290 km of rail and 380 000 concrete sleeper blocks, together with 131 000 m³ of concrete to cast the slabs in situ.

Noting that ‘the installation of the railway systems in the world’s longest railway tunnel is very demanding’, Transtec Gotthard Chairman Marco Hirzel said it was ‘only thanks to advance planning and co-operation between the 720 people engaged in this work, that we can achieve the goal of a timely handover’.

The trackwork is the first of the major elements in the turnkey railway systems contract to be completed. Other elements such as the overhead electrification and signalling are due to be commissioned over the next 12 months, ready for the start of full test running through the tunnel in the autumn of 2015. Testing at up to 220 km/h has been underway for some months, using a 13 km section of one bore.

Alptransit Gotthard has set June 2 2016 as its target date for the official opening ceremony. It will then hand over the completed base tunnels to Swiss Federal Railways, allowing six months for driver training before the start of commercial operations with that year’s December timetable change.