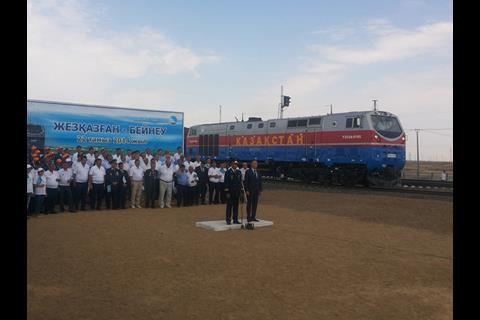 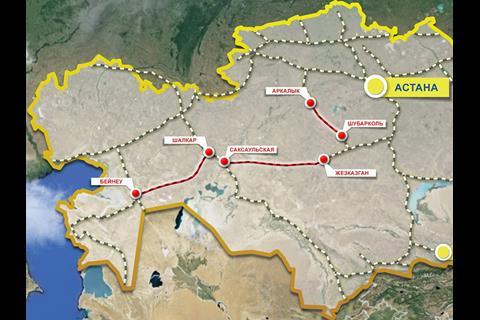 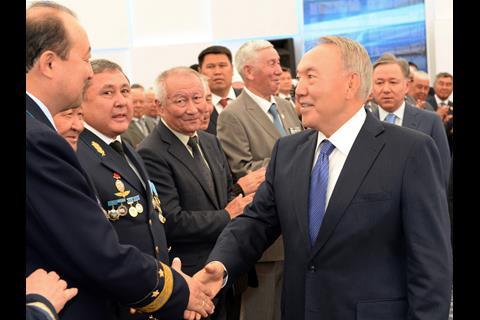 Speaking to staff at stations along the routes from a teleconference in Zhezkazgan, Nazarbayev said the opening of two routes on the same day was a first for Kazakhstan, and the whole country would benefit from the reduction in freight transit times between Asia and Europe.

The 988 km Zhezkazgan – Saksaulskaya – Shalkar – Beyneu line running through sparsely-populated steppe, desert and salt marsh cuts around 1 000 km from the east–west route between the Chinese border and the Caspian Sea port of Aktau. From Aktau there is a link to the line to Turkmenistan which opened in May 2013 as part of a north–south corridor to Iran which is now nearing completion.

National railway KTZ and more than 30 contractors including Zhondeushi, ABK-Nerud and Naiza Kurylys began construction works for the lines in June 2012, with the scope including the provision of support infrastructure including staff housing in remote areas.

KTZ President Askar Mamin said the new lines opening of the lines would provide a powerful impetus for the development of central and western Kazakhstan, stimulating economic activity and creating the conditions for industrial development.