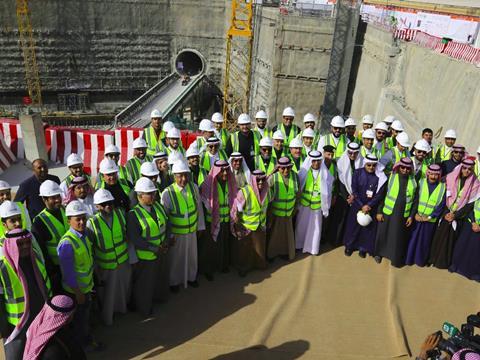 Line 3 is being built by the ArRiyadh New Mobility consortium under a US$5·21bn contract awarded in 2013. Led by Salini Impregilo, the consortium includes Larsen & Toubro and Nesma in the Civil Work Group, and Ansaldo STS and Bombardier Transportation in the Electrical Work Group. Idom and Worley Parsons are also part of the consortium.

In addition to the east-west Line 3, ANM is building Qasr Al Hokm Downtown station, which will provide interchange with the north-south Line 1. The 20 000 m2 station was designed Snøhetta with One Works & Crew.

Line 3 will be the longest of the six lines under construction in the capital. It will have 22 stations and use a fleet of 47 two-car driverless trainsets that Bombardier Transportation is supplying from its Sahagún factory in Mexico. The first of the Innovia 300 trains arrived in Riyadh in November.