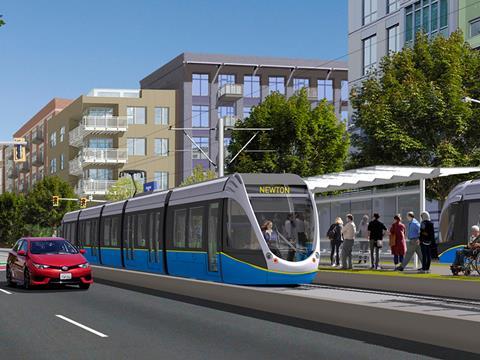 The national government is to contribute C$1·37bn towards the two projects, the province C$1·82bn and transport authority TransLink, the City of Vancouver and the City of Surrey C$1·23bn.

The Surrey – Newton – Guildford LRT would be the first light rail line in the province. The 10·5 km route is intended to run between 152nd Street in Guildford and Newton, using segregated road lanes along 104th Avenue and King George Boulevard; it would have 11 stops. Opening is planned for 2024. Peak services would run every 5 min, with an end-to-end journey time of 27 min.

The $1·65bn project is to be funded and delivered by TransLink, with contributions from the federal government and City of Surrey.

The Broadway Subway project would extend the Millennium Line light metro 5·7 km west in tunnel from VCC-Clark station to Arbutus Street adding six stations. Construction is expected to begin in 2020 for opening in 2025.

The extension would have a capacity of 5 100 more passengers/direction/h than the bus service it would replace, with provision for future capacity increases. The C$2·83bn project is to be funded and delivered by the province, with contributions from the federal government and the City of Vancouver.

‘Bringing light rail to Surrey will transform the city, connect communities, and make getting around the Lower Mainland faster and easier’, said Trudeau. ‘The Broadway Subway will also go a long way in reducing commute times and transit overcrowding, making Vancouver’s Skytrain even more convenient and accessible.’