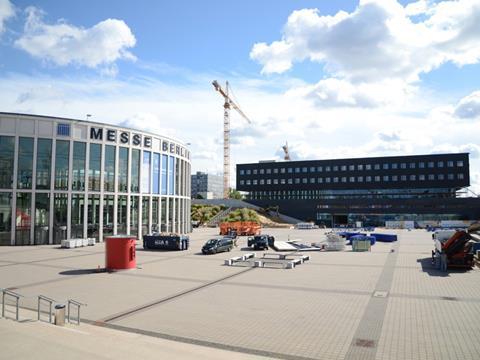 INNOTRANS: More than 200 first-time exhibitors will be participating in the 10th InnoTrans trade fair, which takes place in Berlin on September 23-26.

Once again, InnoTrans has attracted a high proportion of international exhibitors, including a joint US pavilion organised by the Railway Engineering & Maintenance Suppliers Association which will be twice as large as the first REMSA stand in 2012.

As in 2012, Japanese exhibitors will occupy an entire hall, with a joint stand co-ordinated by the Japan Overseas Rolling Stock Association.

A constantly-updated list of registered exhibitors can be found on the show website, along with preliminary hall plans to give visitors an impression of the various theme categories within the exhibition.

Responding to the continuing strong demand for stand space, Messe Berlin is expanding InnoTrans 2014 with an additional exhibition hall in the new CityCube Berlin.

One of the most important construction projects in Berlin in recent years, this architectural treasure is located on the site of the former Deutschlandshalle, next to the south entrance of the fairground and directly connected to Hall 7.

CityCube Berlin will provide this year's InnoTrans event with two additional exhibition levels of 6000 m2 each.