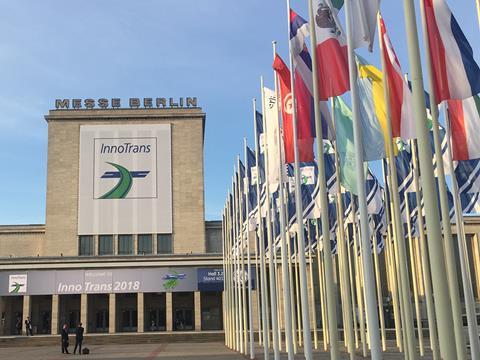 InnoTrans 2020 was originally due to take place in September 2020, but the world’s largest rail industry event had to be rescheduled after the Berlin senate placed a ban on large events being held in the city before October 24 as part of its coronavirus measures.

Following the rescheduled event in April 2021, Messe Berlin says InnoTrans will revert to its original pattern of being held in even-numbered years. The following event would therefore take place in September 2022 as planned.

‘The health and safety of exhibitors, trade visitors and all the employees at the trade fair have the utmost priority’, said InnoTrans director Kerstin Schulz. ‘We would like to take this opportunity to thank our exhibitors for their co-operation and loyalty.’

Welcoming the announcement, the Chief Executive of the German rail industry association VDB Dr Ben Möbius said that postponing the trade fair had been ‘a painful but absolutely right decision’. He predicted that the revised date would ‘create new perspectives for the economic re-start’, adding that ‘climate-friendly mobility, digital mobility and networked mobility will remain central challenges, even after the crisis. Realising the Clean Mobility of the Future together with partners all over the world remains our mission and that is what InnoTrans 2021 will be all about.’