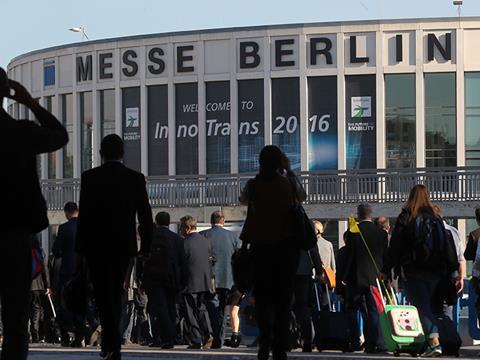 INNOTRANS: Demand for space at this year’s InnoTrans exhibition was outstripping supply ‘to an unprecedented extent’, Organiser Messe Berlin announced on January 17.

The trade show, which takes place on September 18-21, has already seen more than 100 more ‘main exhibitors’ register compared to the previous event, Messe Berlin reported. The waiting list for exhibition space now totals approximately 5 000 m² of floor space. This year, 224 companies will be exhibiting for the first time, with more than 60% of exhibitors coming from abroad, with New Zealand represented for the first time.

In order to satisfy the high demand, Messe Berlin is building a new hall known as hub27 which will create an additional 10 000 m² at the venue. However, this will not be ready before the 2020 show, meaning that for InnoTrans 2018 the outdoor display area will be reduced in size. However, track space for rail vehicles will not be affected by the building work.

Meanwhile, Messe Berlin says that it is working to optimise the available exhibition space to cater for the increased demand. Catering facilities have already been relocated outside the display halls, it added.