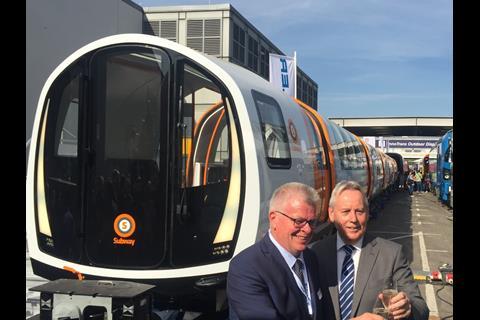 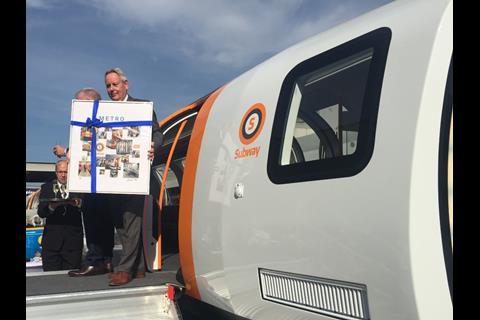 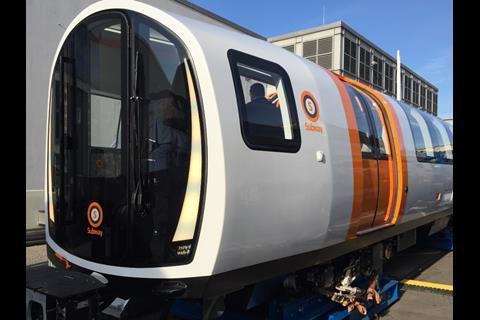 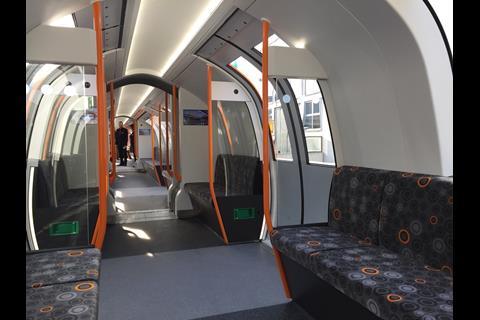 STADLER: Stadler presented its first four-car driverless metro trainset for use on the Glasgow Subway to its client Strathclyde Partnership for Transport at InnoTrans 2018 in Berlin on September 20.

In March 2016 SPT approved the award of a £200m contract to a consortium of Stadler and Ansaldo STS for the supply of 17 driverless trains, signalling, telecoms, an operations control centre and platform screen doors. This is part of a £288m modernisation programme for the 10·5 km, 15-station circular underground line. Once the entire fleet is delivered, 16 trains would be required to run the peak service.

‘This train is a key part of the plan to modernise the Glasgow Subway for generations to come’, said SPT’s Operations & Security Manager David Christie at the ceremony.

Stadler Project Manager Stefan Rosendahl told Railway Gazette that the first train is expected to arrive in Glasgow by the end of this year, with entry into passenger service due in October 2020. The trains will initially have temporary driver’s cabs which would be removed once the transition to driverless operation is complete. During the migration phase services would be operated with a mix of the new train and the existing stock, with Ansaldo STS signalling overlaid on the current system in use for the new trains. SPT aims to complete the upgrade with no interruption to services.

The train is equipped with an auxiliary control desk for degraded operation. This would be used for some depot movements, although stabling and washing would be carried out autonomously.

Noting that this is the first driverless train that Stadler has developed, Executive Vice-President, Marketing & Sales, Peter Jenelten called it ‘a milestone in the history of Stadler’. He added that it is his favourite of the seven vehicles that the supplier is displaying at InnoTrans this year. ‘It is a nice little train, but it has a lot of technology inside.’

The aluminium-bodied trains are being assembled at Stadler’s Altenrhein factory in Switzerland. Selectron is supplying the vehicle control system and ABB is supplying traction converters. The trains will draw power at 600 V DC from a third rail and have a maximum speed of 58 km/h.