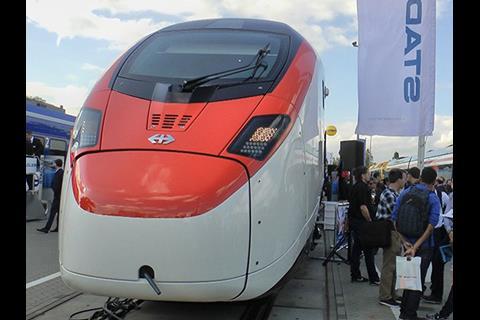 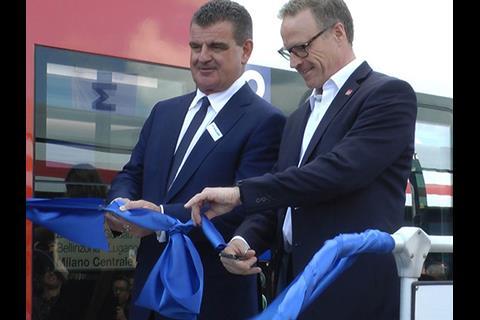 INNOTRANS: Stadler CEO Peter Spuhler and Swiss Federal Railways CEO Andreas Meyer officially presented the EC250 Giruno low-floor electric multiple-unit on September 21 at InnoTrans 2016. A five-car formation is on display at the trade show, and the first complete set will be assembled at the company’s Bussnang plant in January.

SBB ordered 29 11-car sets under a SFr970m contract signed in October 2014, which includes an option for a further 92. From the end of 2019 the EC250 will be introduced on Zürich – Milano services, running via the Gotthard Base Tunnel, and are to be introduced on Frankfurt – Milano services at a later stage. The trains are fitted with electrification equipment for Swiss and German 15 kV 16·7 Hz power supplies, and Italian 3 kV DC and 25 kV 50 Hz to operate on high speed lines in Italy. The trains are designed for a maximum speed of 250 km/h.

The standard gauge EMUs will be 202 m long and 2 900 mm wide. Each trainset will include 117 seats in first class, 286 in second class and 17 in the restaurant car. First and second class will each have two wheelchair spaces.

• A detailed feature article on the EC250 appears in the September 2016 issue of Railway Gazette International.