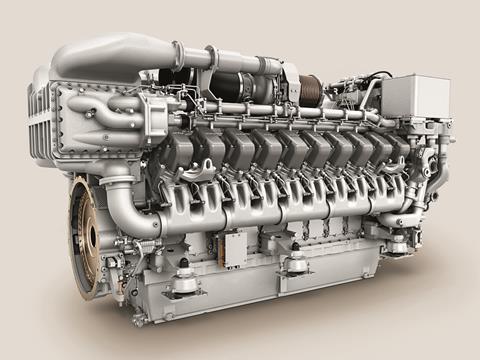 MTU: After several years of development and 15 000 km of testing running, MTU will for its Hybrid PowerPack the first time as a fully-finished product available for immediate ordering.

The Hybrid PowerPack has a diesel engine with a combined electric motor and alternator plus a battery for storing energy recovered during braking, as well as cooling and after-treatment systems. MTU says the Hybrid PowerPack offers fuel savings of up to 25% and a significant reduction in noise compared with a diesel-only drives. It is suitable for both new vehicles and for repowering existing rolling stock, and can be used in conjunction with a pantograph to provide an electro-diesel option.

MTU will also be presenting its EnergyPack battery system developed to meet the requirements of rail operators, which complies with relevant industry standards and has demonstrated its reliability in endurance trials.

Also on show will be the most powerful version of MTU’s Series 4000 locomotive engine, which is available to meet a variety of emission regulations in powers between 850 and 3 300 kW. The 20V 4000 R63L on show is being used to power 232 freight locomotives which CRRC is building for South Africa’s Transnet Freight Rail.

MTU will also be highlighting its ValueCare range of customised maintenance contracts, which feature the rapid supply of spare parts and consumables such as engine coolant, engine oil and filters and also remanufactured engines and parts. Complementing this line-up are remote services which use the ability to gather and analyse operating data on a web-based application to help ensure effective operation and the best-possible maintenance.