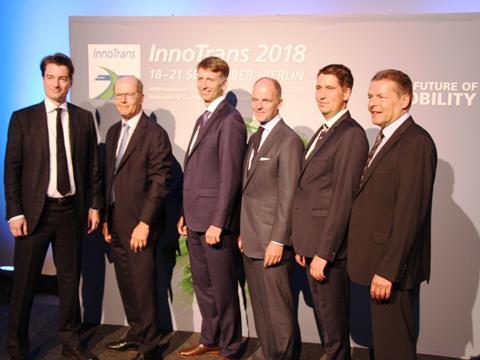 INNOTRANS: The 12th InnoTrans trade fair opening in Berlin on September 18 will be ‘more concentrated, more innovative and more informative’ than ever, according to Chief Executive of Messe Berlin Dr Christian Göke.

Speaking at the pre-opening International Press Circle, he said this year’s show had attracted a 3 062 exhibitors from 61 countries, with a record 62% of companies coming from outside Germany. More than 400 innovations from the global rail sector will be on display including 146 World Premières making their international debut. There are 155 vehicles on display in the outdoor area.

Messe Berlin expects more than 130 000 trade visitors to pass through the fair over the four days. The proportion of exhibitors from outside Europe continues to increase, with the biggest growth coming from India and Taiwan.

‘Once again we have broken the previous record, set in 2016, and achieved new best-ever figures for the number of exhibitors, vehicles on display, and items making their first international appearance’, said Göke.

Messe Berlin’s head of Mobility & Services Matthias Steckmann added that ‘not only is InnoTrans the world’s leading trade fair for the rail sector, but it has now become established as an essential platform for every aspect of local passenger transport’.

According to CEO of the German railway industry association Ben Möbius, the major talking point this year is digitisation and smart connectivity, with big data, automation and connected technologies apparent in every aspect of the rail business. The key challenge, he said, would be to balance the knowledge needed for data analysis with the railway expertise to interpret the results; rail sector players would need to assess how much could be done alone and where some form of collaboration would be appropriate.