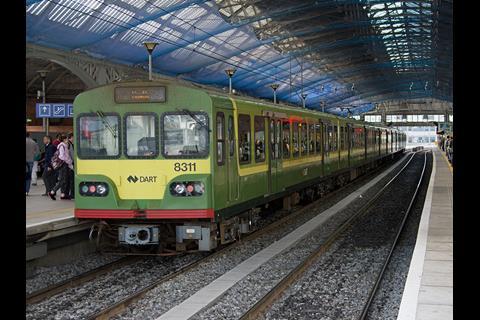 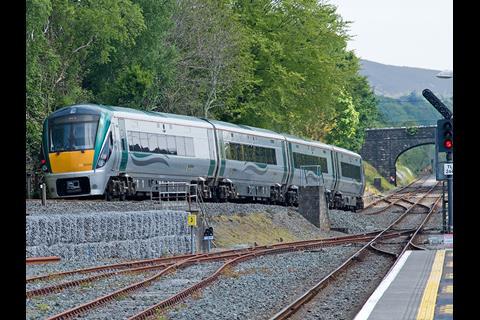 IRELAND: Construction of Dublin’s north-south underground MetroLink line, renewal of the DART suburban EMU fleet and further investment in light rail are key elements in the National Transport Authority’s six-year implementation plan for 2019-24. Covering all forms of transport, this plan is intended to prioritise spending within the broader envelope of the government’s 2018-27 National Development Plan.

Emphasising that the Irish economy has been growing strongly, NTA says additional transport capacity is required to cope with demand. Much of the implementation plan is focused on the capital, where daily ridership has bounced back following a 30% fall during 2008-10 economic recession.

The plan allocates €1 773m for light rail and metro investment in the Greater Dublin Area over the six years. The biggest element is the 26 km MetroLink line connecting Swords and Sandyford via Dublin Airport and the city centre, on which detailed design is underway. Construction is expected to start in 2021 for opening around 2027, at an estimated total cost of €3bn. While much of the metro will run underground, south of the city it will take over the increasingly busy Green Line to Sandyford.

In the meantime, further investment in the Luas light rail network is envisaged to increase capacity and improve the ticketing and customer information systems. Seven 54·6 m long trams were introduced on the Green Line in conjunction with the opening in 2017 of the 5·6 km cross-city extension to Broombridge, and eight more are to be procured to cope with rising demand. Existing 40 m trams are to be lengthened, and Sandyford depot will be modified to maintain the larger fleet. Planning will also continue for potential light rail extensions to Finglas, Lucan, Bray and Poolbeg, as envisaged in the NDP.

NTA favours heavy rail for corridors predicted to be carrying more than 7 500 passengers in the peak hour, building on recent investment in the rail network. This included the reopening of the Phoenix Park tunnel for passenger services, allowing trains from the western suburbs to run through to Dublin Connolly and Grand Canal Dock.

The implementation plan allocates €1 l049·5m for heavy rail, split across seven areas. As the authority’s statutory remit for rail infrastructure only covers the capital and its surroundings, much of the spending is directed at projects in the 2016-35 Transport Strategy for the Greater Dublin Area. While the NTA remains committed to the DART Underground cross-city link in the longer term, the success of the Phoenix Park reopening means that initial investment can be focused on non-tunnel elements of the DART Expansion Programme, including electrification north to Drogheda, southwest to Hazelhatch and west to Maynooth and M3 Parkway, as well as the related junction remodelling and resignalling.

With an indicative €2bn available up to 2027 under the NDP, NTA intends to procure 480 new multiple-unit cars, both to replace some of the oldest DART EMUs and to expand the fleet. Of these, 200 would be EMUs and the other 280 would have diesel/battery and electric capability for bi-mode operation to expand services ahead of electrification. Along with new stations to provide interchange with bus, light rail and metro, the aim is to provide an integrated high-capacity transport network across the region.

The ongoing city centre resignalling is expected to provide 50% more train paths each way between Connolly and Grand Canal Dock, where additional turn-back facilities are envisaged. This is expected to unblock a major bottleneck with benefits for inter-city passengers as well as commuters. With the existing national CTC control centre at Connolly approaching the limit of its capacity and the technology becoming outdated, plans are being developed for a new National Train Control Centre at Heuston to manage signalling and communications across the entire Iarnród Éireann network by 2024.

As well as the DART fleet renewal, IE needs to address short-term demands for more capacity. NTA’s implementation plan envisages the procurement of more Class 22000 inter-city DMUs and industry sources confirm IE is in talks with Hyundai and Mitsui over an order for additional ICR intermediate vehicles. In January NTA invited expressions of interest for the supply of second-hand rolling stock, amid suggestions that 22 three-car Class 185 DMUs coming off-lease at the UK’s TransPennine Express franchise could be regauged to 1 600 mm and sent to Ireland.

Looking further ahead, IE and Translink NIR want to develop the Dublin - Belfast Enterprise cross-border route to an hourly service with new high quality trains around 2025-27, and NTA anticipates that the procurement process will start in 2023.