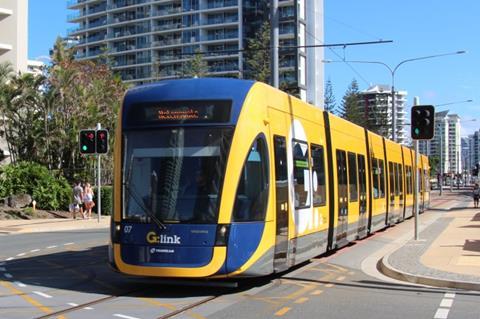 Following an initial call for expressions of interest, GoldlinQ shortlisted three bidders in February to submit final tenders. John Holland has been selected ahead of bids from the CPBSW joint venture between CPB Contractors and Seymour Whyte Construction, and the Burleigh Link JV between Fulton Hogan Construction and UGL Engineering.

Enabling works and utilities diversion have been underway for some time, and the main works contract is expected to be finalised by the end of this year so that construction can begin in early 2021. Completion is scheduled for 2023.

The 6·7 km extension from Broadbeach South will be built in the central reservation of the existing Gold Coast Highway, adding a further eight stops and offering a journey time of around 17 min. It will take the line to a total length of 27 km with 27 stops. Another five trams will be procured to augment the 18 seven-section Flexity 2 cars supplied by Bombardier Transportation for stages 1 and 2, while Keolis Downer will continue to operate the extended line under contract to GoldlinQ.

Total cost of the extension, including the additional trams, is put at A$709m. This will be funded by A$348·5m from the Queensland state government, A$269m from the national government and A$91·5m from local authorities.

According to Queensland’s Minister for Transport & Main Roads Mark Bailey, who is also MP for Broadbeach, construction of the extension will support more than 760 jobs, helping to revitalise the local economy following the coronavirus pandemic.

‘Because Queenslanders have managed the health response to Covid-19, it means the Palaszczuk government has been able to get on with the job of creating jobs and continuing the state’s plan for economic recovery’, he explained. ‘For businesses and people on the Gold Coast that means building that all-important light rail connection between the city’s north and centre towards the south. We’ve seen more than 50 million trips taken on light rail since it first opened, which shows just how hungry Gold Coasters and visitors to the city are for better public transport.’