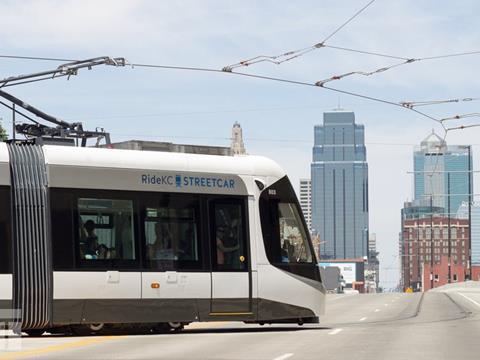 USA: Kansas City Mayor Sly James launched services on the KC Streetcar on May 6, kicking off a weekend of celebrations which saw more than 32 000 journeys made.

The 3·1 route-km north-south line connects Union Station with the River Market district. It has 10 stops, including three on a single-direction loop at the northern end, beyond which there is a depot.

Construction started in May 2014 and was undertaken by a joint venture of Herzog Contracting Corp and Stacy & Witbeck. The line is operated amd maintained by Herzog Transit Services under a five-year contract worth $15·8m that was awarded last year.

CAF has supplied a fleet of four 100% low-floor bidirectional Urbos trams from its factory in Elmira, New York, under a contract signed in 2013. The three-section vehicles are 23·6 m long and 2 650 mm wide with capacity for 156 passengers including 32 seated. The vehicles have batteries mounted on the roof that provide emergency off-wire capability so that the vehicles can clear junctions if power is lost. Four substations supply power to the line at 750 V DC.