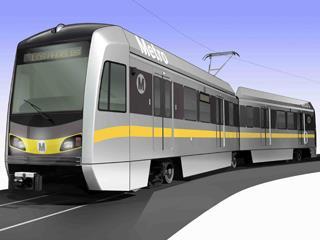 USA: The Los Angeles Metro board approved the exercise of two options to purchase a total of 97 light rail vehicles from KinkiSharyo International on July 25, triggering a contract provision which requires the supplier to establish a factory in LA County.

The $396·7m firm order follow from an initial tranche of 78 cars worth $299m ordered under a framework deal for up to 235 LRVs potentially valued at $890m which was agreed in April 2012. The LRVs are needed for the expansion of Metro's light rail network, which is scheduled to be completed by the end of the decade, and also to replace cars dating from the late 1980s and 1990s which will be reaching the end of their life cycle.

The new factory is to be built in Palmdale, 100 km north of Los Angeles. It will include a bodyshell fabrication facility, and is expected to create around 250 permanent jobs. The company also plans to move its US headquarters from Massachusetts to the Los Angeles suburb of El Segundo.

KinkiSharyo has previously assembled 512 cars in the USA, beginning with Boston in the late 1980s. These were followed by orders from Dallas, Hudson-Bergen LRT, Newark City Subway, San Jose, and more recently Seattle and Phoenix. Each contract has been carried out in a locally-sourced 'pop-up' plant or at the customer's maintenance facilities, using bodyshells supplied from Japan.