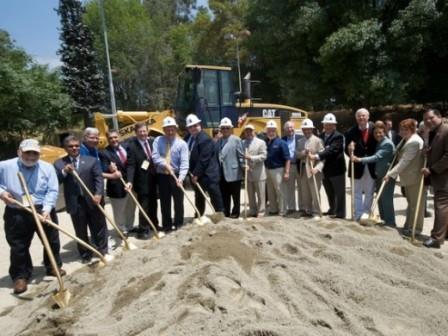 USA: A groundbreaking ceremony was held in Los Angeles on June 26 for the 18·3 km first phase of the Gold Line Foothill Extension, which will take the light rail route from its current terminal in east Pasadena through the San Gabriel Valley to Azusa.

However, only one contract has been awarded so far, an $18·5m design-build deal with Skanska USA Civil West California District Inc and Aecom Technical Services Inc for what the agency building the project has dubbed its ‘iconic freeway structure’, an elaborate bridge that will take the tracks from the median of the Foothill Freeway to existing right-of-way on the highway’s south side.

Phase 1, serving five stations in five cities and costing $735m, is fully funded through a transport sales tax approved by Los Angeles County voters in 2008 and is scheduled for completion in 2014. The second phase, which is not yet funded, will serve six additional cities and terminate in Montclair, bringing the extension to 38·6 km. Officials of the Metro Gold Line Construction Authority hope to have it finished by 2017, bringing the full route from East Los Angeles to 70·3 km.