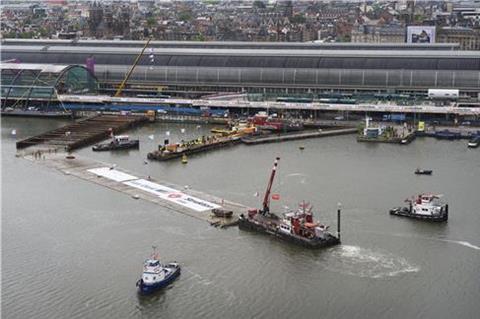 NETHERLANDS: The first of three sections forming the immersed tunnel that will carry Amsterdam’s north-south metro line under the River IJ is due to be moved into position on September 25. Weighing 12 000 tonnes, the 140 m long tunnel section will be moved into position at Sixhaven on the north bank of the river use four tugs and a pusher craft.

Contractors Heijmans and Strukton expect to move the second section into position next to Amsterdam Centraal station on October 2, followed by the final portion in the middle of the river on October 9. Three further dates have been reserved in case work should be delayed by bad weather.

Serving eight stations, the 9⋅7 km Noord/Zuidlijn runs for 7⋅1 km in bored tunnel. A TBM christened ‘Victoria’ began work on the final section between Vijzelgracht and Rokin on September 20.