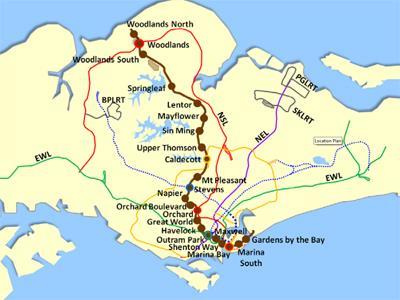 SINGAPORE: Land Transport Authority announced the alignment and station locations for the future Thomson Line on August 29. The 30 km underground metro line is scheduled to be built in three phases for completion in 2021.

The route runs north to south from Woodlands to Marina Bay, linking a corridor including Woodlands, Sin Ming, Thomson and Kim Seng directly to the city centre.

There are to be 22 stations, including six interchanges with the East West, North South, North East, Circle and future Downtown lines. Traffic is estimated at 400 000 passengers a day.

To optimise land use, property around Outram Park station is to be acquired by Singapore Land Authority and amalgamated with adjoining state-owned land to provide a site for high-density mixed-use development