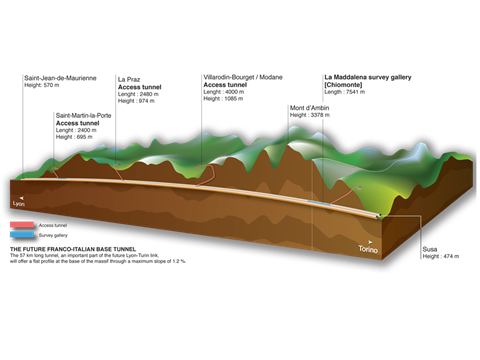 EUROPE: Tunnelling is expected to get underway towards the end of this summer at Saint-Martin-la-Porte in France on the test bore for the base tunnel planned to carry a high speed line between Lyon and Torino. This will use a 12 m diameter TBM built by NFM Technologies at Le Creusot which was named ‘Federica’ on January 14.

With the project expected to cost around €8∙6bn in total, the main works packages for Lyon — Torino are to be finalised within three months, according to Hubert du Mesnil, President of project promoter Tunnel Euralpin Lyon Turin. Tendering is due to commence this summer for work worth €500m divided into two lots, according to TELT Deputy Director General Alain Chabert, followed by a further €2bn of contracts 12 months later. Main works are expected to commence in the four quarter of 2017.

Although funding of €2bn is to be provided up the end of 2019 by France and Italy and the European Union under an agreement signed in December 2015, a complete funding package has yet to be agreed for the Lyon – Torino project. This is likely to be discussed at the forthcoming Franco-Italian inter-governmental summit in March, following the completion of an independent assessment of project costs by Tractebel and TUC Rail.