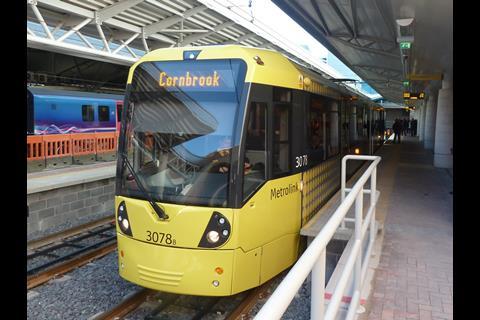 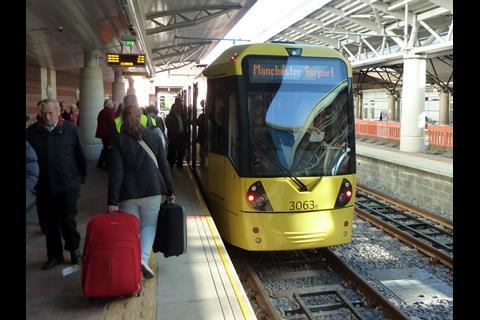 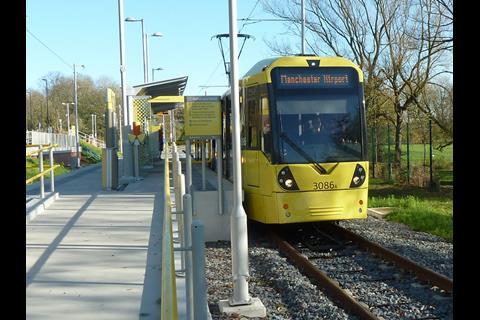 UK: The first passenger service on Manchester Metrolink’s latest extension departed from Manchester Airport at 05.49 on November 3, more than a year ahead of schedule.

The 14·5 km Airport Line with 15 stops leaves the existing East Didsbury branch at St Werburgh’s Road and uses a mix of segregated alignment and street running to reach the airport, where interchange is provided with main line services, via Wythenshawe. Services between the airport and Cornbrook run every 12 min, with an end-to-end journey time of 45 min. It is expected that Airport Line trams will operate through the city centre to Victoria once the Second City Crossing is completed in 2017.

A 300-space park-and-ride site is in operation at Sale Water Park, just off the M60 motorway. This is free for Metrolink passengers.

‘Manchester Airport has seen considerable investment made in its ground transport options and the Metrolink will be an important addition to our services, bringing the airport and important projects such as Airport City closer to thousands of residents across Greater Manchester’, said Manchester Airports Group Chief Operating Officer Andrew Cowan.

During the opening ceremony, Chancellor of the Exchequer George Osborne announced a devolution agreement with local authorities in the Greater Manchester region that could see Metrolink and other local transport come under the control of an elected mayor. This could accelerate the roll-out of Transport for Greater Manchester’s smart ticketing programme, and provide funding for a further light rail line to the Trafford Centre retail complex.