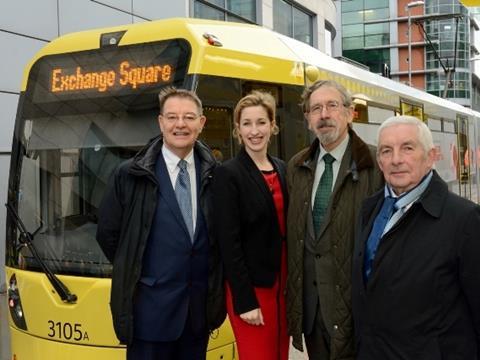 UK: The first stage of Manchester Metrolink’s Second City Crossing was inaugurated on December 6 with the opening of a stop at Exchange Square.

Services on the 600 m section between Exchange Square and Victoria Station operate every 6 min during the day, running through onto Metrolink’s Oldham line.

Work on the Second City Crossing started in 2014 and is being delivered by Transport for Greater Manchester in partnership with WSP Parsons Brinckerhoff. The principal contractor is the M-Pact Thales consortium of Laing O’Rourke, VolkerRail and Thales. The total cost is £165m, of which £10·8m is coming from the European Regional Development Fund.

The remainder of the Second City Crossing is due to open in 2017. Intended to increase capacity on the expanded light rail network, the route diverges from the Bury and Rochdale line at Victoria. After Exchange Square, it will run through Corporation Street, Cross Street and Princess Street to rejoin the route to Altrincham, Didsbury and Manchester Airport in Lower Mosley Street, where the stop at St Peter’s Square is being rebuilt with four platform tracks. The stop at Deansgate-Castlefield has already been rebuilt with three platforms including a central reversing track so that services can be trunked back clear of the temporary single-track section through St Peter’s Square.