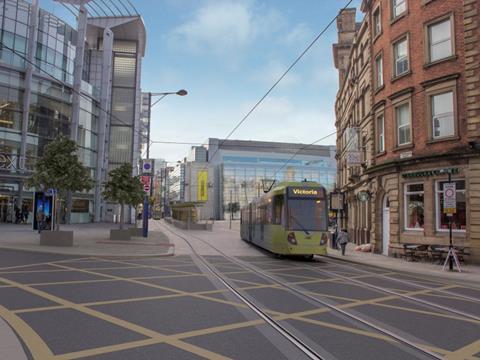 UK: Construction of Manchester Metrolink’s Second City Crossing officially began on November 11, with the start of work on the northernmost section between Victoria and Exchange Square.

Forming part of a three-year programme of urban development works known as Grow, the second route through the city centre is intended to increase capacity on the expanded light rail network. Diverging from the Bury and Rochdale line at Victoria, the Second City Crossing will run via Exchange Square, Corporation Street, Cross Street and Princess Street to rejoin the route to Altrincham, Didsbury and Manchester Airport in Lower Mosley Street, where the stop at St Peter’s Square is being rebuilt with four platform tracks.

The new route is due to be completed in 2017, although Transport for Greater Manchester hopes that trams from the north will be running as far as Exchange Square by the end of 2015 or early 2016. Utility diversion has been under way since the start of this year, and a £10·8m grant from European Regional Development Fund has enabled construction to begin sooner than originally planned. As well as partially funding the Victoria – Exchange Square section, the grant will also support the reconstruction of the stop at Deansgate-Castlefield with three platforms including a central reversing track.