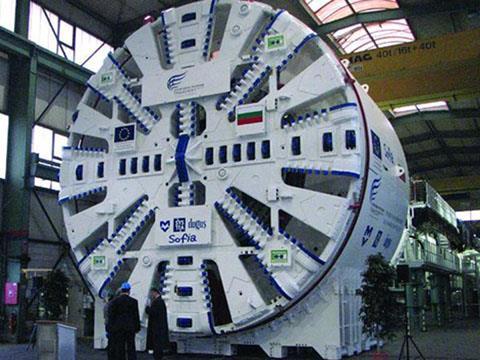 The €15m machine, weighing 1 600 tonnes, was purchased from Herrenknecht AG by Doğuş İnşaat, the contractor responsible for building the Nadezhda — Patriarch Evtimii section of Line 2.

The ceremony was held at the starting pit next to the road intersection at Nadezhda. The TBM will excavate a single two-track tunnel over the 3·8 km central section of Line 2 from Nadezhda to the junction of Vitosha Boulevard and Partiarch Evtimii, which will have four stations. Deadline for implementation is 15 months.

The machine will bore up to 9 m per day, generating about 1 000 m3 or 50 lorry loads of spoil per day. Construction staff will work 24 h/day, in three shifts.

The TBM will drill as deep as 23 m in places due to the nature of the terrain and the need to pass under two rivers in the city centre. The only station on Line 1 situated so deep is Vasil Levski Stadium. Lowest point on the route will be at Serdika station on St Nedelya Square where Line 2 passes under Line 1, 26 m below ground level.

Line 2 is funded by the EU’s Operational Programme for Transport. The project has an indicative budget of €245·7m, of which around €157·4m is coming in grants from the European Regional Development Fund. €157m will come directly from EU funds and €27·7m from national co-funding; the municipality will contribute €61m.