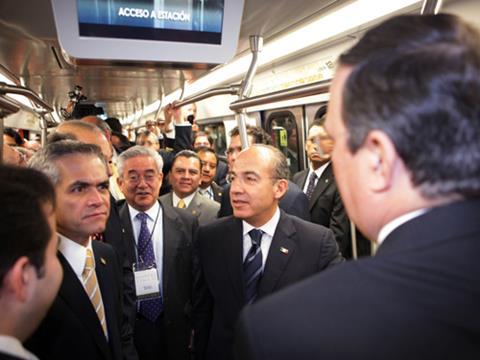 MEXICO: President Felipe Calderón attended the opening of Mexico City metro Line 12, the Gold Line, on October 30, saying it 'rivals the best in the world'. Travel is free until November 4.

Line 12 runs for 25 km from Mixcoac on Line 7 to Tláhuac in the southeast, an area of the city not previously served by the metro. There are 20 stations including interchanges with lines 2, 3 and 8.

Total cost of the project was 24·5bn pesos. The federal government provided 7·5bn pesos, alongside 5·7bn in local contributions.

Civil works were undertaken by ICA and Carso, with construction launched in September 2008. The line was originally to run entirely underground, but this was later modified. The western section runs through a 7·7 km tunnel bored using a 10·2 m diameter Robbins earth pressure balance TBM, while the eastern section is elevated.

The end-to-end journey time is 45 min, compared with up to 2 h by road. The Gold Line is expected to lead to a reduction in car and bus traffic, cutting CO2 emissions by 21 700 tonnes/year and helping improve air quality in Mexico City. Grütter Consulting assisted the city with an application for clean development registration for project, enabling credits to be sold to other countries seeking to meet their emissions reduction targets.